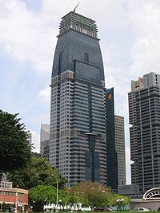 Encyclopedia
Capital Tower is the fourth tallest skyscraper
Skyscraper
A skyscraper is a tall, continuously habitable building of many stories, often designed for office and commercial use. There is no official definition or height above which a building may be classified as a skyscraper...
in the city of Singapore
Singapore
Singapore , officially the Republic of Singapore, is a Southeast Asian city-state off the southern tip of the Malay Peninsula, north of the equator. An island country made up of 63 islands, it is separated from Malaysia by the Straits of Johor to its north and from Indonesia's Riau Islands by the...
, reaching a height of 254 metres. Formally planned as the POSBank
POSBank
POSBank is a brand of consumer banking services offered by DBS Bank in Singapore, after it was acquired by the latter in November 1998. Prior to this, it was a major public bank which began life as the Post Office Savings Bank, offering low-cost banking services to Singaporeans...
's headquarters building, it was transferred to the ownership of CapitaLand
CapitaLand
CapitaLand Limited is the result of a merger in the year 2000 of then DBS Land and Pidemco Land. It is one of Asia's largest real estate companies. Headquartered and listed in Singapore, the company's core businesses are real estate development, hospitality and real estate financial services...
. It became the company's flagship building and was then named after the company. Since the completion of the building in 2000, Capital Tower graces the Singapore skyline as the fourth tallest skyscraper, and the tallest building in the Shenton Way
Shenton Way
Shenton Way is a major trunk road in Singapore's central business district, most known for the commercial skyscrapers flanking both sides of the road. The Road is a one way street which starts at the junction of Cross Street, Central Boulevard and Raffles Quay and ends at Keppel Road...
-Tanjong Pagar
Tanjong Pagar
Tanjong Pagar is a historic district located within the Central Business District in Singapore, straddling the Outram Planning Area and the Downtown Core under the Urban Redevelopment Authority's urban planning zones....
financial district.

Capital Tower has 52 floors, served by five shuttle double-deck lift
Double-deck elevator
Double-deck elevators are designed with two elevator cars that are attached, one on top of the other. This allows passengers on two consecutive floors to be able to use the elevator simultaneously, significantly increasing the passenger capacity of an elevator shaft...
s. The lifts can load 3,540 kg and travel at a speed of 10m/s. The building stands out visually at night as the logo and some parts of the building would change its lights once in every few seconds.

The top floor of the tower is occupied by the China Club. Only club members have access. The club features a bar, restaurant with private dining rooms and meeting rooms. The club opened on 19 May 2001.