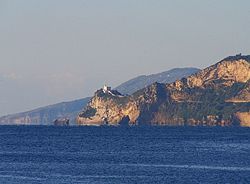 Cape Miseno is the headland that marks the northwestern limit of the Gulf of Naples
Gulf of Naples
The Gulf of Naples is a c. 15 km wide gulf located in the south western coast of Italy, . It opens to the west into the Mediterranean Sea. It is bordered on the north by the cities of Naples and Pozzuoli, on the east by Mount Vesuvius, and on the south by the Sorrentine Peninsula and the main...
as well as the Bay of Pozzuoli
Pozzuoli
Pozzuoli is a city and comune of the province of Naples, in the Italian region of Campania. It is the main city of the Phlegrean peninsula.-History:Pozzuoli began as the Greek colony of Dicaearchia...
in southern Italy. The cape is directly across from the island of Procida
Procida
Procida is one of the Flegrean Islands off the coast of Naples in southern Italy. The island is between Cape Miseno and the island of Ischia. With its tiny satellite island of Vivara, it is a comune of the province of Naples, in the region of Campania. The population is about ten...
and is named for Misenus
Misenus
In Greek and Roman mythology, Misenus was a name attributed to two individuals.*Misenus was a friend of Odysseus.*Misenus was a character in Virgil's epic poem the Aeneid. He was a brother-in-arms of Hector and, after Hector's death, Aeneas' trumpeter...
, a character in Virgil
Virgil
Publius Vergilius Maro, usually called Virgil or Vergil in English , was an ancient Roman poet of the Augustan period. He is known for three major works of Latin literature, the Eclogues , the Georgics, and the epic Aeneid...
's Aeneid
Aeneid
The Aeneid is a Latin epic poem, written by Virgil between 29 and 19 BC, that tells the legendary story of Aeneas, a Trojan who travelled to Italy, where he became the ancestor of the Romans. It is composed of roughly 10,000 lines in dactylic hexameter...
.

Historically, the cape was important to the Romans since it was a natural shelter for passage into the inner harbor of Portus Julius
Portus Julius
Portus Julius was the home port for the Roman western imperial fleet, the classis Misenensis, named for nearby Cape Miseno...
, the home port for the Roman western imperial fleet. Mythologically, important sections of the Aeneid play out in the Gulf of Naples: This is where Aeneas' comrade, Misenus, master of the sea-horn — the conch-shell — made "the waves ring" with his music and challenged the sea-god Triton
Triton (mythology)
Triton is a mythological Greek god, the messenger of the big sea. He is the son of Poseidon, god of the sea, and Amphitrite, goddess of the sea, whose herald he is...
to musical battle. He was dashed into the sea and killed by "jealous Triton". Then:

"...Pious Aeneas
Aeneas
Aeneas , in Greco-Roman mythology, was a Trojan hero, the son of the prince Anchises and the goddess Aphrodite. His father was the second cousin of King Priam of Troy, making Aeneas Priam's second cousin, once removed. The journey of Aeneas from Troy , which led to the founding a hamlet south of...
sets up a mighty tomb above Misenus
bearing his arms, a trumpet, and an oar;
it stands beneath a lofty promontory,
now known as Cape Misenus after him:
it keeps a name that lasts through all the ages."