Encyclopedia
Canton Road is a road in Hong Kong
Hong Kong
Hong Kong is one of two Special Administrative Regions of the People's Republic of China , the other being Macau. A city-state situated on China's south coast and enclosed by the Pearl River Delta and South China Sea, it is renowned for its expansive skyline and deep natural harbour...
, linking the former west reclamation
Land reclamation in Hong Kong
Land is in short supply in Hong Kong, and land reclamation has been conducted there since the mid-19th century.-Projects:One of the earliest and famous project was the Praya Reclamation Scheme, which added 50 to of land in 1890 during the second phase of construction...
shore in Tsim Sha Tsui
Tsim Sha Tsui
Tsim Sha Tsui , often abbreviated as TST, is an urbanized area in southern Kowloon, Hong Kong. The area is administratively part of the Yau Tsim Mong District. Tsim Sha Tsui East is a piece of land reclaimed from the Hung Hom Bay now east of Tsim Sha Tsui...
, Jordan
Jordan, Hong Kong
Jordan is an area in the Yau Tsim Mong District of Hong Kong. The unofficial area is named after a road of the same name.-Geography:Jordan is located in the central part of the Yau Tsim Mong District, as suggested by the name of some bus stops nearby...
, Yau Ma Tei
Yau Ma Tei
Yau Ma Tei, also known as Waterloo , is an area in the Yau Tsim Mong District in the south of the Kowloon Peninsula in Hong Kong.-Name:Yau Ma Tei is a phonetic transliteration of the name 油麻地 in Cantonese...
and Mong Kok
Mong Kok
Mong Kok , less often known as Argyle , is an area in the Yau Tsim Mong District on Kowloon Peninsula, Hong Kong...
on the Kowloon Peninsula
Kowloon Peninsula
The Kowloon Peninsula is a peninsula that forms the southern part of the main landmass in the territory of Hong Kong. The Kowloon Peninsula and the area of New Kowloon are collectively known as Kowloon....
. The road runs mostly parallel and west to Nathan Road. It starts from the junction with Salisbury Road
Salisbury Road, Hong Kong
Salisbury Road is a major road in Tsim Sha Tsui, Kowloon, Hong Kong. It runs parallel to Victoria Harbour, starting from its western end at the Star Ferry Pier, passing by Blackhead Point, to Tsim Sha Tsui East...
in the south and ends in the north at the junction with Lai Chi Kok Road
Lai Chi Kok Road
Lai Chi Kok Road is a road in the western part of New Kowloon, Hong Kong. It links Lai Chi Kok to Mong Kok, via Tai Kok Tsui, Sham Shui Po and Cheung Sha Wan. It starts from the junction with Nathan Road near Pioneer Centre in the south and ends near Mei Foo Sun Chuen...
in the Prince Edward
Prince Edward, Hong Kong
Prince Edward is an area in northern Kowloon, Hong Kong. It is adjacent to the Prince Edward Station of the MTR rapid transit system in Mong Kok. It is administratively under the Yau Tsim Mong District. It was named after the namesake road. It contains the northern end of Nathan Road. Strictly...
area. Canton road contains many shops and is usually very lively from morning all the way to night.

The road was originally named as MacDonnell Road. To avoid confusion with MacDonnell Road
MacDonnell Road
MacDonnell Road, is a road in the affluent and ultra-expensive Mid-Levels district on Hong Kong Island, Hong Kong. MacDonnell Road is named after former Hong Kong Governor Richard Graves MacDonnell. Starting from Garden Road, the road runs westward in the Mid-Levels and ends in Kennedy Road.The...
on the Hong Kong Island
Hong Kong Island
Hong Kong Island is an island in the southern part of the Hong Kong Special Administrative Region. It has a population of 1,289,500 and its population density is 16,390/km², as of 2008...
, its name changed to Canton Road. The roads in the area were mainly named after cities of China
China
Chinese civilization may refer to:* China for more general discussion of the country.* Chinese culture* Greater China, the transnational community of ethnic Chinese.* History of China* Sinosphere, the area historically affected by Chinese culture...
and Vietnam
Vietnam
Vietnam – sometimes spelled Viet Nam , officially the Socialist Republic of Vietnam – is the easternmost country on the Indochina Peninsula in Southeast Asia. It is bordered by China to the north, Laos to the northwest, Cambodia to the southwest, and the South China Sea –...
. The translator of Canton Road misintrepreted Canton as Guangdong
Guangdong
Guangdong is a province on the South China Sea coast of the People's Republic of China. The province was previously often written with the alternative English name Kwangtung Province...
(廣東) instead of the city of Canton
Guangzhou
Guangzhou , known historically as Canton or Kwangchow, is the capital and largest city of the Guangdong province in the People's Republic of China. Located in southern China on the Pearl River, about north-northwest of Hong Kong, Guangzhou is a key national transportation hub and trading port...
(廣州).

The road was elongated from the section in Tsim Sha Tsui. In course of urban development, sections of road were used for other constructions, making the sections disjoint. 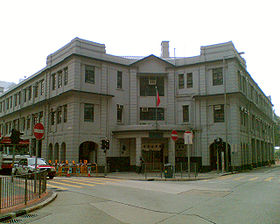 The section starts at Jordan Road and ends at Public Square Street
Public Square Street
Public Square Street is a street in Yau Ma Tei, Kowloon, Hong Kong. The street runs in an east-west alignment from Cliff Road to Ching Ping Street, meeting Nathan Road, Temple Street, Shanghai Street, Reclamation Street and Canton Road in its course....
. The part of this section between Jordan Road and Kansu Street is sometimes called "Jade Street" because of the number of jewelry shops selling jade
Jade
Jade is an ornamental stone.The term jade is applied to two different metamorphic rocks that are made up of different silicate minerals:...
.
The road is interrupted north of Public Square Street, and Prosperous Garden, a housing estate, is located in its place. The Broadway Cinematheque
Broadway Cinematheque
Broadway Cinematheque is a cinema in Yau Ma Tei, Hong Kong, run by Broadway Circuit. Located in Prosperous Garden, a private housing estate, the cinema provides a wider spectrum of films than other cinemas in Hong Kong. The cinema hosts four houses with 640 seats...
is located within Prosperous Garden.

It was proposed that a station, Canton Road
Canton Road Station
Canton Road Station was a planned railway station on the Kowloon Southern Link of West Rail Line between East Tsim Sha Tsui Station and Austin Station, beneath the shopping mall, Harbour City in Tsim Sha Tsui, by replacing the existing underground car park...
on the Kowloon Southern Link of the West Rail Line extension, could be built beneath the Tsim Sha Tsui section of the road, outside Harbour City. The plan was put off after unsuccessful negotiation between KCRC
Kowloon-Canton Railway Corporation
The Kowloon–Canton Railway Corporation was established in 1982 under the Kowloon–Canton Railway Corporation Ordinance for the purposes of operating the Kowloon–Canton Railway , and to construct and operate other new railways...
and The Wharf
The Wharf (Holdings)
The Wharf Limited , or Wharf in short, is a company founded in 1886 in Hong Kong. As its name suggests, the company's original business was in running wharfage and dockside warehousing, and it was originally known as The Hongkong and Kowloon Wharf and Godown Company, Limited...
on financial arrangement. Another station, Austin, near the junction of Canton Road and Wui Cheung Road in Kwun Chung
Kwun Chung
Kwun Chung , or Koon Chung in early document, is an area of Hong Kong, southwest of Yau Ma Tei located in the Yau Tsim Mong District of western Kowloon Peninsula. South of the area, across Austin Road is Tsim Sha Tsui by Victoria Harbour...
opened in August 2009.