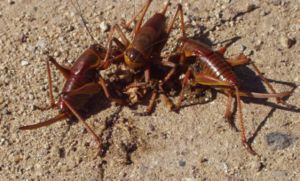 In zoology
Zoology
Zoology |zoölogy]]), is the branch of biology that relates to the animal kingdom, including the structure, embryology, evolution, classification, habits, and distribution of all animals, both living and extinct...
, cannibalism is the act of one individual of a species consuming all or part of another individual of the same species as food. Cannibalism is a common ecological
Ecology
Ecology is the scientific study of the relations that living organisms have with respect to each other and their natural environment. Variables of interest to ecologists include the composition, distribution, amount , number, and changing states of organisms within and among ecosystems...
interaction in the animal kingdom and has been recorded for more than 1500 species
It does not, as once believed, occur only as a result of extreme food shortages or artificial conditions, but commonly occurs under natural conditions in a variety of species. Cannibalism seems to be especially prevalent in aquatic communities, in which up to approximately 90% of the organisms engage in cannibalism at some point of the life cycle. Cannibalism is also not restricted to carnivorous species, but is commonly found in herbivores and detritivore
Detritivore
Detritivores, also known as detritophages or detritus feeders or detritus eaters or saprophages, are heterotrophs that obtain nutrients by consuming detritus . By doing so, they contribute to decomposition and the nutrient cycles...
s.

Sexual cannibalism is a special case of cannibalism in which a female organism kills and consumes a conspecific (same species
Species
In biology, a species is one of the basic units of biological classification and a taxonomic rank. A species is often defined as a group of organisms capable of interbreeding and producing fertile offspring. While in many cases this definition is adequate, more precise or differing measures are...
) male before, during, or after copulation. Rarely, these roles are reversed. Sexual cannibalism has been recorded in the female redback spider, black widow spider, praying mantis, and scorpion
Scorpion
Scorpions are predatory arthropod animals of the order Scorpiones within the class Arachnida. They have eight legs and are easily recognized by the pair of grasping claws and the narrow, segmented tail, often carried in a characteristic forward curve over the back, ending with a venomous stinger...
, among others. 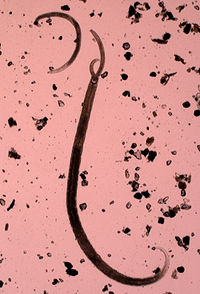 Size-structured cannibalism, in which large individuals consume smaller conspecifics, is more common. In such size-structured populations, cannibalism can be responsible for 8% (Belding's Ground Squirrel
Belding's Ground Squirrel
Belding's ground squirrel , also called pot gut, sage rat or picket-pin, is a squirrel that lives on mountains in the western United States. In California, it often is found at 6,500–11,800 feet in meadows between Lake Tahoe and Kings Canyon...
) to 95% (dragonfly
Dragonfly
A dragonfly is a winged insect belonging to the order Odonata, the suborder Epiprocta or, in the strict sense, the infraorder Anisoptera . It is characterized by large multifaceted eyes, two pairs of strong transparent wings, and an elongated body...
larva
Larva
A larva is a distinct juvenile form many animals undergo before metamorphosis into adults. Animals with indirect development such as insects, amphibians, or cnidarians typically have a larval phase of their life cycle...
e) of the total mortality, making it a significant and important factor for population and community dynamics. Such size structured cannibalism has commonly been observed in the wild for a variety of taxa.

Another common form of cannibalism is filial cannibalism (a form of infanticide
Infanticide (zoology)
In animals, infanticide involves the killing of young offspring by a mature animal of its own species, and is studied in zoology, specifically in the field of ethology. Ovicide is the analogous destruction of eggs. Although human infanticide has been widely studied, the practice has been observed...
) in which adults eat their own offspring. Classical vertebrate examples include chimpanzee
Chimpanzee
Chimpanzee, sometimes colloquially chimp, is the common name for the two extant species of ape in the genus Pan. The Congo River forms the boundary between the native habitat of the two species:...
s, where groups of adult males have been observed to attack and consume conspecific
Conspecificity
Conspecificity is a concept in biology. Two or more individual organisms, populations, or taxa are conspecific if they belong to the same species....
infants, and cat
Cat
The cat , also known as the domestic cat or housecat to distinguish it from other felids and felines, is a small, usually furry, domesticated, carnivorous mammal that is valued by humans for its companionship and for its ability to hunt vermin and household pests...
s. In agricultural settings, pig
Pig
A pig is any of the animals in the genus Sus, within the Suidae family of even-toed ungulates. Pigs include the domestic pig, its ancestor the wild boar, and several other wild relatives...
s are known to eat their own young
Savaging
In animal science, savaging is overt aggression, usually including cannibalistic infanticide of newborn offspring, by a mother animal. It is particularly prevalent among pigs, where it affects up to 5% of gilts....
, accounting for a sizeable percentage of total piglet deaths.

Filial cannibalism is particularly common in teleost fishes, appearing in at least seventeen different families of teleosts Within this diverse group of fishes, there have been many, variable explanations of the possible adaptive value of filial cannibalism. One of these is the energy-based hypothesis, which suggests that fish eat their offspring when they are low on energy as an investment in future reproductive success . This has been supported by experimental evidence, showing that male three-spined stickleback
Three-spined stickleback
The three-spined stickleback, Gasterosteus aculeatus, is a fish native to much of northern Europe, northern Asia and North America. It has been introduced into parts of southern and central Europe.-Distribution and morphological variation:...
s,, male tessellated darters, and male sphinx blenny fish all consume or absorb their own eggs to maintain their physical conditions. In other words, when males of a fish species are low on energy, it might sometimes be beneficial for them to feed on own offspring to survive and invest in future reproductive success.

Another hypotheses as to the adaptive value of filial cannibalism in teleosts is that is increases density-dependent egg survivorship. In other words, filial cannibalism simply increases overall reproductive success by helping the other eggs make it to maturity by thinning out the numbers. Possible explanations as to why this is so include increasing oxygen availability to the remaining eggs, the negative effects of accumulating embryo waste, and predation.

Further evidence also suggests that occasionally filial cannibalism might be the unfortunate by-product of cuckoldry in fish. Males consume broods, which may include their own offspring, when they believe a certain percentage of the brood contains genetic material that is not theirs.

Intrauterine cannibalism is a behaviour in some carnivorous species, in which multiple embryos are created at impregnation, but only one or two are born. The larger or stronger ones consume their less-developed siblings as a source of nutrients.

In adelphophagy, the fetus eats sibling embryos, while in oophagy
Oophagy
Oophagy , literally "egg eating", is the practice of embryos feeding on eggs produced by the ovary while still inside the mother's uterus. The word oophagy is formed from the classical Greek ᾠόν and classical Greek φᾱγεῖν ....
it feeds on eggs.

Intrauterine cannibalism is known to occur in lamnoid sharks
Lamniformes
Lamniformes is an order of sharks commonly known as mackerel sharks . It includes some of the most familiar species of sharks, such as the great white shark, as well as more unusual representatives, such as the goblin shark and the megamouth shark.Members of the order are distinguished by...
and in the Fire Salamander
Fire Salamander
The fire salamander is probably the best-known salamander species in Europe. It is black with yellow spots or stripes to a varying degree; some specimens can be nearly completely black while on others the yellow is dominant. Shades of red and orange may sometimes appear, either replacing or mixing...
, as well as in some teleost fishes. The Carboniferous
Carboniferous
The Carboniferous is a geologic period and system that extends from the end of the Devonian Period, about 359.2 ± 2.5 Mya , to the beginning of the Permian Period, about 299.0 ± 0.8 Mya . The name is derived from the Latin word for coal, carbo. Carboniferous means "coal-bearing"...
period chimaera
Chimaera
Chimaeras are cartilaginous fish in the order Chimaeriformes, known informally as ghost sharks, ratfish , spookfish , or rabbitfishes...
, Delphyodontos
Delphyodontos
Delphyodontos dacriformes was a prehistoric holocephalid fish from the early Carboniferous, from the Bear Gulch Limestone Lagerstätte, in Montana. Its fossils consist mainly of aborted fetuses or newly hatched young...
dacriformes, is suspected of having practiced intrauterine cannibalism, also, due to the sharp teeth of the recently born (or possibly aborted) juveniles (adults are unknown), and the presence of fecal matter in the juveniles' guts.