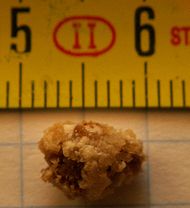 A calculus is a stone (a concretion
Concretion
A concretion is a volume of sedimentary rock in which a mineral cement fills the porosity . Concretions are often ovoid or spherical in shape, although irregular shapes also occur. The word 'concretion' is derived from the Latin con meaning 'together' and crescere meaning 'to grow'...
of material, usually mineral salts) that forms in an organ or duct of the body. Formation of calculi is known as lithiasis. Stones cause a number of medical conditions.

Some common principles (below) apply to stones at any location, but for specifics see the particular stone type in question.

Calculi are not to be confused with gastrolith
Gastrolith
A gastrolith, also called a stomach stone or gizzard stones, is a rock held inside a gastrointestinal tract. Gastroliths are retained in the muscular gizzard and used to grind food in animals lacking suitable grinding teeth. The grain size depends upon the size of the animal and the gastrolith's...
s.

Calculi usually are asymptomatic, and large calculi may have required many years to grow to their large size.

Stones can cause disease by several mechanisms:

A number of important medical conditions are caused by stones:

Diagnostic workup varies by the stone type, but in general:

Again, treatment varies by stone type, but in general: