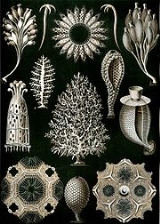 Encyclopedia
The calcareous sponges of class
Class (biology)
In biological classification, class is* a taxonomic rank. Other well-known ranks are life, domain, kingdom, phylum, order, family, genus, and species, with class fitting between phylum and order...
Calcarea are members of the animal phylum Porifera, the cellular sponges. They are characterized by spicules made out of calcium carbonate
Calcium carbonate
Calcium carbonate is a chemical compound with the formula CaCO3. It is a common substance found in rocks in all parts of the world, and is the main component of shells of marine organisms, snails, coal balls, pearls, and eggshells. Calcium carbonate is the active ingredient in agricultural lime,...
in the form of calcite
Calcite
Calcite is a carbonate mineral and the most stable polymorph of calcium carbonate . The other polymorphs are the minerals aragonite and vaterite. Aragonite will change to calcite at 380-470°C, and vaterite is even less stable.-Properties:...
or aragonite
Aragonite
Aragonite is a carbonate mineral, one of the two common, naturally occurring, crystal forms of calcium carbonate, CaCO3...
. While the spicules in most species have three points, in some species they have either two or four points. 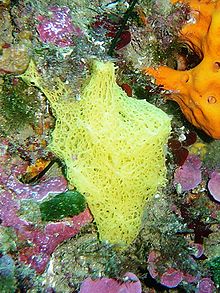 All sponges in this class are strictly marine, and, while they are distributed worldwide, most are found in shallow tropical waters. Like all other sponges, they are sedentary filter feeders.

All three sponge body plans are represented within class Calcarea : asconoid
Asconoid
Asconoid is one of three possible body plans for sponges, which form the phylum Porifera in kingdom Animalia and subkingdom Parazoa which means that they do not have a definite body shape. The asconoid body plan is characterized by a stalk-like spongocoel surrounded by a single layer of choanocytes...
, syconoid, and leuconoid. Typically, calcareous sponges are small, measuring less than 10 centimetres (3.9 in) in height, and drab in colour. However, a few brightly coloured species are also known.

Calcareous sponges vary from radially symmetrical vase-shaped body types to colonies made up of a meshwork of thin tubes, or irregular massive forms. The skeleton has either a mesh or honeycomb structure.

Calcarean sponges first appeared during the Cambrian
Cambrian
The Cambrian is the first geological period of the Paleozoic Era, lasting from Mya ; it is succeeded by the Ordovician. Its subdivisions, and indeed its base, are somewhat in flux. The period was established by Adam Sedgwick, who named it after Cambria, the Latin name for Wales, where Britain's...
and their diversity was greatest during the Cretaceous period
Cretaceous
The Cretaceous , derived from the Latin "creta" , usually abbreviated K for its German translation Kreide , is a geologic period and system from circa to million years ago. In the geologic timescale, the Cretaceous follows the Jurassic period and is followed by the Paleogene period of the...
. Recent molecular analysis suggests that the class Calcarea should be designated as a phylum
Phylum
In biology, a phylum The term was coined by Georges Cuvier from Greek φῦλον phylon, "race, stock," related to φυλή phyle, "tribe, clan." is a taxonomic rank below kingdom and above class. "Phylum" is equivalent to the botanical term division....
, in particular the first to have diverged in the Kingdom Animalia
Animal
Animals are a major group of multicellular, eukaryotic organisms of the kingdom Animalia or Metazoa. Their body plan eventually becomes fixed as they develop, although some undergo a process of metamorphosis later on in their life. Most animals are motile, meaning they can move spontaneously and...
; the other sponges belong to the phylum Silicarea
Silicarea
The siliceous sponges form a major group of the phylum Porifera, consisting of classes Demospongiae and Hexactinellida. They are characterized by spicules made out of silicon dioxide, unlike calcareous sponges....
.

The calcareous sponges are divided into two subclasses and seven orders: