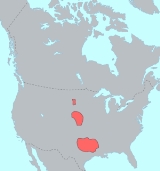 Encyclopedia
The Caddoan languages are a family
Language family
A language family is a group of languages related through descent from a common ancestor, called the proto-language of that family. The term 'family' comes from the tree model of language origination in historical linguistics, which makes use of a metaphor comparing languages to people in a...
of Native American languages. They are spoken by Native Americans in parts of the Great Plains
Great Plains
The Great Plains are a broad expanse of flat land, much of it covered in prairie, steppe and grassland, which lies west of the Mississippi River and east of the Rocky Mountains in the United States and Canada. This area covers parts of the U.S...
of the central United States
United States
The United States of America is a federal constitutional republic comprising fifty states and a federal district...
, from North Dakota
North Dakota
North Dakota is a state located in the Midwestern region of the United States of America, along the Canadian border. The state is bordered by Canada to the north, Minnesota to the east, South Dakota to the south and Montana to the west. North Dakota is the 19th-largest state by area in the U.S....
south to Oklahoma
Oklahoma
Oklahoma is a state located in the South Central region of the United States of America. With an estimated 3,751,351 residents as of the 2010 census and a land area of 68,667 square miles , Oklahoma is the 28th most populous and 20th-largest state...
.


The Kitsai language is now extinct
Extinct language
An extinct language is a language that no longer has any speakers., or that is no longer in current use. Extinct languages are sometimes contrasted with dead languages, which are still known and used in special contexts in written form, but not as ordinary spoken languages for everyday communication...
, as its members were absorbed in the 19th century into the Wichita
Wichita (tribe)
The Wichita people are indigenous inhabitants of North America, who traditionally spoke the Wichita language, a Caddoan language. They have lived in Kansas, Oklahoma, and Texas...
tribe. All of the other Caddoan languages are critically endangered; Caddo
Caddo language
Caddo is the only surviving Southern Caddoan language of the Caddo language family. It is spoken by the Caddo Nation of Oklahoma. Today, only 25 elderly speakers are estimated to remain, none of whom are monolingual Caddo speakers, making Caddo a critically endangered language...
is now spoken by only 25 people, Pawnee
Pawnee language
The Pawnee language is a Caddoan language spoken by some Pawnee Native Americans now located in north central Oklahoma. Their traditional historic lands were along the Platte River in what is now Nebraska. Once the language of thousands of Pawnees, today Pawnee is spoken by a shrinking number of...
by 20, Arikara
Arikara language
Arikara is a Caddoan language spoken by the Arikara people, who reside primarily at Fort Berthold reservation in North Dakota. Arikara is very close to the Pawnee language, but they are not mutually intelligible....
by three, and Wichita
Wichita language
Wichita is a moribund Caddoan language spoken in Oklahoma by the Wichita and Affiliated Tribes. Only one fluent speaker remains, Doris McLemore, although in 2007 there were only three first language learners still alive...
by just one tribal elder, Doris McLemore
Doris McLemore
Doris Jean Lamar McLemore is the last fluent speaker of the Wichita language, a Caddoan language spoken by the Wichita and Affiliated Tribes, indigenous to Oklahoma....
. Caddo, Wichita, and Pawnee are spoken in Oklahoma by small numbers of tribal elders. Arikara is spoken on the Fort Berthold Reservation
Fort Berthold Reservation
The Fort Berthold Indian Reservation is a U.S. Indian reservation in western North Dakota that is home for the federally recognized Mandan, Hidatsa, and Arikara Nation, also known as the Three Affiliated Tribes...
in North Dakota
North Dakota
North Dakota is a state located in the Midwestern region of the United States of America, along the Canadian border. The state is bordered by Canada to the north, Minnesota to the east, South Dakota to the south and Montana to the west. North Dakota is the 19th-largest state by area in the U.S....
.

Speakers of some of the languages were formerly more widespread; the Caddo
Caddo
The Caddo Nation is a confederacy of several Southeastern Native American tribes, who traditionally inhabited much of what is now East Texas, northern Louisiana and portions of southern Arkansas and Oklahoma. Today the Caddo Nation of Oklahoma is a cohesive tribe with its capital at Binger, Oklahoma...
, for example, used to live in northeastern Texas
Texas
Texas is the second largest U.S. state by both area and population, and the largest state by area in the contiguous United States.The name, based on the Caddo word "Tejas" meaning "friends" or "allies", was applied by the Spanish to the Caddo themselves and to the region of their settlement in...
, southwestern Arkansas
Arkansas
Arkansas is a state located in the southern region of the United States. Its name is an Algonquian name of the Quapaw Indians. Arkansas shares borders with six states , and its eastern border is largely defined by the Mississippi River...
, and northwestern Louisiana
Louisiana
Louisiana is a state located in the southern region of the United States of America. Its capital is Baton Rouge and largest city is New Orleans. Louisiana is the only state in the U.S. with political subdivisions termed parishes, which are local governments equivalent to counties...
, as well as southeastern Oklahoma. The Pawnee formerly lived along the Platte River
Platte River
The Platte River is a major river in the state of Nebraska and is about long. Measured to its farthest source via its tributary the North Platte River, it flows for over . The Platte River is a tributary of the Missouri River, which in turn is a tributary of the Mississippi River which flows to...
in what is now Nebraska
Nebraska
Nebraska is a state on the Great Plains of the Midwestern United States. The state's capital is Lincoln and its largest city is Omaha, on the Missouri River....
.

Glottochronology
Glottochronology
Glottochronology is that part of lexicostatistics dealing with the chronological relationship between languages....
is a controversial method of reconstructing in broad detail the history of a language and its relationships. In the case of proto-Caddoan it appears that it divided into two branches, Northern and Southern, more than 3,000 years ago. (The division of the language implies also a geographic and/or political separation.) South Caddoan or Caddo proper evolved in north-eastern Texas and adjacent Oklahoma, Arkansas, and Louisiana. No daughter languages are known, although some probably existed in the 16th and 17th century but were not recorded.