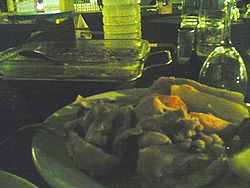 Cachupa is a famous dish from the Cape Verde
Cape Verde
The Republic of Cape Verde is an island country, spanning an archipelago of 10 islands located in the central Atlantic Ocean, 570 kilometres off the coast of Western Africa...
islands, West Africa. This slow cooked stew of corn (hominy), beans, and fish or meat (sausage, beef, goat, or chicken) is often referred to as the country's national dish
National dish
A national dish is a dish, food or a drink that is considered to represent a particular country, nation or region.A dish can become a national dish for a variety of reasons. It can be the national dish because it is a staple daily food for the majority of the population. It can also be the national...
. Each island has its own regional variation. It is a hearty dish, and may even be served reheated at breakfast.

The version of the recipe called "Cachupa Rica" tends to have more ingredients than the simpler, "Cachupa Pobre".

When cachupa leftovers are reheated on the next morning, the resulting dish is called cachupa frita or cachupa refogada, meaning "fried cachupa". This dish may be served as breakfast
Breakfast
Breakfast is the first meal taken after rising from a night's sleep, most often eaten in the early morning before undertaking the day's work...
with a fried egg and a fried local sausage (linguiça).
The source of this article is wikipedia, the free encyclopedia.  The text of this article is licensed under the GFDL.