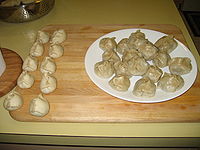 Buuz are a type of Mongolian steamed dumpling
Dumpling
Dumplings are cooked balls of dough. They are based on flour, potatoes or bread, and may include meat, fish, vegetables, or sweets. They may be cooked by boiling, steaming, simmering, frying, or baking. They may have a filling, or there may be other ingredients mixed into the dough. Dumplings may...
filled with minced mutton
Lamb (food)
Lamb, mutton, and hogget are the meat of domestic sheep. The meat of a sheep in its first year is lamb; that of a juvenile sheep older than 1 year is hogget; and the meat of an adult sheep is mutton....
, or beef
Beef
Beef is the culinary name for meat from bovines, especially domestic cattle. Beef can be harvested from cows, bulls, heifers or steers. It is one of the principal meats used in the cuisine of the Middle East , Australia, Argentina, Brazil, Europe and the United States, and is also important in...
meat. The meat is flavoured with onion or garlic and salted. Occasionally, they are flavoured with sprouted fennel seeds and other seasonal herbs. Some households add mashed potato, cabbage or rice depending on their preferences.

The meat ball is then placed inside a small pocket of dough which is folded around the ball with a small opening at the top and in the chef's own personal style. The buuz is then steamed and eaten by hand, with the dough pocket catching the juices of the meat.

Buuz is an example of authentic Mongolian cuisine
Mongolian cuisine
Mongolian cuisine refers to the local culinary traditions of Mongolia and Mongolian styled dishes. The extreme continental climate has affected the traditional diet, so the Mongolian cuisine primarily consists of dairy products, meat, and animal fats. Use of vegetables and spices is limited...
. The dish is traditionally eaten at home on Tsagaan Sar
Tsagaan Sar
Tsagaan Sar , white moon or white month) is the lunisolar New Year festival of the Mongols. Today, Mongols are found in Mongolia, Inner Mongolia, Buryatia and Kalmykia. It is often celebrated around the same time as the Chinese New Year...
, the Mongolian New Year. It is also offered at restaurants and small cafes throughout the capital of Ulaanbaatar
Ulaanbaatar
Ulan Bator or Ulaanbaatar is the capital and largest city of Mongolia. An independent municipality, the city is not part of any province, and its population as of 2008 is over one million....
. It is similar to another Mongolian dumpling, khuushuur
Khuushuur
Khuushuur is a kind of meat pastry or dumpling popular in Mongolia, similar to Russian and other cuisines' chiburekki. The meat, either beef or mutton, is ground up and mixed with onion salt and other spices. The cook rolls the dough into circles, then places the meat inside the dough and folds...
, except that the latter is not steamed but fried.