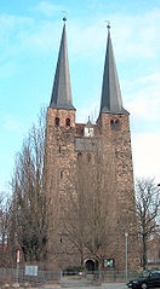 Encyclopedia
Burg bei Magdeburg is a town of about 24,700 inhabitants on the Elbe-Havel-Canal in Germany
Germany
Germany , officially the Federal Republic of Germany , is a federal parliamentary republic in Europe. The country consists of 16 states while the capital and largest city is Berlin. Germany covers an area of 357,021 km2 and has a largely temperate seasonal climate...
, northeast of Magdeburg
Magdeburg
Magdeburg , is the largest city and the capital city of the Bundesland of Saxony-Anhalt, Germany. Magdeburg is situated on the Elbe River and was one of the most important medieval cities of Europe....
. It is situated around a former weir
Weir
A weir is a small overflow dam used to alter the flow characteristics of a river or stream. In most cases weirs take the form of a barrier across the river that causes water to pool behind the structure , but allows water to flow over the top...
, the Sachsenschleusen ("Saxon
Saxony
The Free State of Saxony is a landlocked state of Germany, contingent with Brandenburg, Saxony Anhalt, Thuringia, Bavaria, the Czech Republic and Poland. It is the tenth-largest German state in area, with of Germany's sixteen states....
Sluice
Sluice
A sluice is a water channel that is controlled at its head by a gate . For example, a millrace is a sluice that channels water toward a water mill...
s"). It is the capital of the district of Jerichower Land
Jerichower Land
Jerichower Land is a district in the north-east of Saxony-Anhalt, Germany. Neighboring districts are Anhalt-Bitterfeld, Salzlandkreis, the district-free city Magdeburg, Börde, Stendal, and the districts Havelland and Potsdam-Mittelmark in Brandenburg.- History :In 1816, the area of the district...
in the state
States of Germany
Germany is made up of sixteen which are partly sovereign constituent states of the Federal Republic of Germany. Land literally translates as "country", and constitutionally speaking, they are constituent countries...
of Saxony-Anhalt
Saxony-Anhalt
Saxony-Anhalt is a landlocked state of Germany. Its capital is Magdeburg and it is surrounded by the German states of Lower Saxony, Brandenburg, Saxony, and Thuringia.Saxony-Anhalt covers an area of...
.

The town is famous for its mediaeval churches and towers.

Burg formerly had the first shoe manufacturing factory in Europe and was the first to produce manufactured crispbread in Germany, beginning production in 1931.