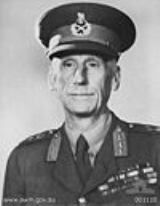 White was born in St Arnaud in Victoria. He joined the colonial militia force in Queensland
Queensland
Queensland is a state of Australia, occupying the north-eastern section of the mainland continent. It is bordered by the Northern Territory, South Australia and New South Wales to the west, south-west and south respectively. To the east, Queensland is bordered by the Coral Sea and Pacific Ocean...
in 1898, and served in the Boer War
Second Boer War
The Second Boer War was fought from 11 October 1899 until 31 May 1902 between the British Empire and the Afrikaans-speaking Dutch settlers of two independent Boer republics, the South African Republic and the Orange Free State...
, serving in the Australian Commonwealth Horse
Australian Commonwealth Horse
The Australian Commonwealth Horse was a mounted infantry unit of the Australian Army formed for service during the Second Boer War in South Africa in 1902 and was the first expeditionary military unit established by the newly formed Commonwealth of Australia following Federation in 1901...
. In 1901 he became a founding member of the new Australian Army
Australian Army
The Australian Army is Australia's military land force. It is part of the Australian Defence Force along with the Royal Australian Navy and the Royal Australian Air Force. While the Chief of Defence commands the Australian Defence Force , the Army is commanded by the Chief of Army...
, and in 1906 was the first Australian officer to attended the British Army
British Army
The British Army is the land warfare branch of Her Majesty's Armed Forces in the United Kingdom. It came into being with the unification of the Kingdom of England and Scotland into the Kingdom of Great Britain in 1707. The new British Army incorporated Regiments that had already existed in England...
staff college. In 1912 he returned to Australia and became Director of Military Operations, at a time when Andrew Fisher
Andrew Fisher
Andrew Fisher was an Australian politician who served as the fifth Prime Minister on three separate occasions. Fisher's 1910-13 Labor ministry completed a vast legislative programme which made him, along with Protectionist Alfred Deakin, the founder of the statutory structure of the new nation...
's Labor
Australian Labor Party
The Australian Labor Party is an Australian political party. It has been the governing party of the Commonwealth of Australia since the 2007 federal election. Julia Gillard is the party's federal parliamentary leader and Prime Minister of Australia...
government was expanding Australia's defence capacity.

When the First World War broke out in 1914, White supervised the first contingents of the Australian Imperial Force
Australian Imperial Force
The Australian Imperial Force was the name given to all-volunteer Australian Army forces dispatched to fight overseas during World War I and World War II.* First Australian Imperial Force * Second Australian Imperial Force...
(AIF) to go the front. At Gallipoli, he was chief of staff to Major General Sir William Bridges
William Throsby Bridges
Major General Sir William Throsby Bridges KCB, CMG served with Australian forces during World War I, and was the first Australian to reach general officer rank...
and then to William Birdwood, gaining the rank of Brigadier General
Brigadier General
Brigadier general is a senior rank in the armed forces. It is the lowest ranking general officer in some countries, usually sitting between the ranks of colonel and major general. When appointed to a field command, a brigadier general is typically in command of a brigade consisting of around 4,000...
. After the evacuation from Gallipoli which he masterminded as "The Silence Ruse", he was chief administrative officer of the AIF in France, under the command of John Monash
John Monash
General Sir John Monash GCMG, KCB, VD was a civil engineer who became the Australian military commander in the First World War. He commanded the 13th Infantry Brigade before the War and then became commander of the 4th Brigade in Egypt shortly after the outbreak of the War with whom he took part...
. In the battle for the Pozières Heights at the end of July which ended in failure, the senior British commander General Douglas Haig
Douglas Haig
Douglas Haig, 1st Earl Haig was a British soldier and senior commander during World War I.Douglas Haig may also refer to:* Club Atlético Douglas Haig, a football club from Argentina* Douglas Haig , American actor...
found fault with Birdwood and White, White stood up to Haig and pointed out that whatever mistakes had been made, the commander-in-chief had been misinformed in several particulars, which White then specified "in detail, item by item". Haig was so impressed that when he had finished he put his hand on White's shoulder and said, "I dare say you're right, young man."

During 1917 the value of the Australian troops was being more and more appreciated, but among the troops themselves there was some feeling that they were being too often sacrificed through the mistakes of the higher command. By September White had become convinced that as far as possible piecemeal operations must be avoided, that too great advances should not be attempted, and that there must be a proper use of artillery barrage. These tactics were successfully applied in the Battle of Menin Road on 20 September 1917, and in later thrusts.

Early in 1918, White, realizing the difficulties of repatriation at the end of the war, raised the problem of what would have to be done while the men were waiting for shipping. This led to the educational scheme afterwards adopted. In May, Birdwood and White, at the request of General Rawlinson, prepared plans for an offensive but these were shelved in the meanwhile. When General Birdwood was given command of the fifth army, the choice of his successor in command of the Australian corps lay between Monash and White. Monash was White's senior and, though White's reputation stood very high, it was impossible to pass over so capable and successful an officer as Monash. White was given the important position of Chief of the General Staff of Birdwood's army. It was a happy combination, for though Birdwood was a great leader of men he was less interested in organization, and White had a genius for it.

After the war White was Chief of the General Staff until his retirement in 1923. In the same year he was appointed Chairman of the newly constituted Commonwealth Public Service Board, supervising the transfer of departments from Melbourne to the new capital, Canberra
Canberra
Canberra is the capital city of Australia. With a population of over 345,000, it is Australia's largest inland city and the eighth-largest city overall. The city is located at the northern end of the Australian Capital Territory , south-west of Sydney, and north-east of Melbourne...
. In 1928 he chose not to move to Canberra, declining a further term with the Public Service Board in order to remain close to his home and grazing property "Woodnaggerak" near Buangor, Victoria.

In 1940, as Australia mobilised the 2nd AIF to take part in the Second World War, White was recalled to service at the age of 63, promoted to General
General (Australia)
General is the second highest rank, and the highest active rank, of the Australian Army and was created as a direct equivalent of the British military rank of General; it is also considered a four-star rank....
, and re-appointed Chief of the General Staff. White would probably have become Australia's overall military commander in that war instead of Thomas Blamey
Thomas Blamey
Field Marshal Sir Thomas Albert Blamey GBE, KCB, CMG, DSO, ED was an Australian general of the First and Second World Wars, and the only Australian to date to attain the rank of field marshal....
had he not been aboard the Royal Australian Air Force
Royal Australian Air Force
The Royal Australian Air Force is the air force branch of the Australian Defence Force. The RAAF was formed in March 1921. It continues the traditions of the Australian Flying Corps , which was formed on 22 October 1912. The RAAF has taken part in many of the 20th century's major conflicts...
plane which crashed in the Canberra air disaster
Canberra air disaster, 1940
The 1940 Canberra air disaster was a plane crash that occurred near Canberra, the capital of Australia, on 13 August 1940, during World War II. The six passengers, including three members of the Australian Cabinet and the Chief of the General Staff, and the four crew were all killed...
on 13 August 1940, killing all aboard. Monash described him as "far and away the ablest soldier Australia had ever turned out".