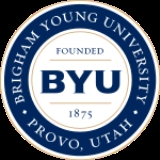 Overview
Brigham Young University (often referred to as BYU, or sometimes just the Y) is a private university
University
A university is an institution of higher education and research, which grants academic degrees in a variety of subjects. A university is an organisation that provides both undergraduate education and postgraduate education...
located in Provo, Utah
Provo, Utah
Provo is the third largest city in the U.S. state of Utah, located about south of Salt Lake City along the Wasatch Front. Provo is the county seat of Utah County and lies between the cities of Orem to the north and Springville to the south...
. It is owned and operated by The Church of Jesus Christ of Latter-day Saints (LDS Church), and is the United States' largest religious university and third-largest private university.

Approximately 98% of the university's 34,000 students are members of the LDS Church, and one-third of its American students come from within the state of Utah
Utah
Utah is a state in the Western United States. It was the 45th state to join the Union, on January 4, 1896. Approximately 80% of Utah's 2,763,885 people live along the Wasatch Front, centering on Salt Lake City. This leaves vast expanses of the state nearly uninhabited, making the population the...
.