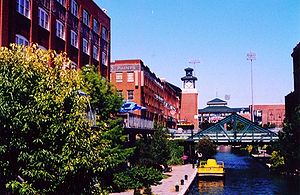 Bricktown is an entertainment district just east of downtown Oklahoma City, Oklahoma
Oklahoma City, Oklahoma
Oklahoma City is the capital and the largest city in the state of Oklahoma. The county seat of Oklahoma County, the city ranks 31st among United States cities in population. The city's population, from the 2010 census, was 579,999, with a metro-area population of 1,252,987 . In 2010, the Oklahoma...
(United States
United States
The United States of America is a federal constitutional republic comprising fifty states and a federal district...
). It was formerly a major warehouse
Warehouse
A warehouse is a commercial building for storage of goods. Warehouses are used by manufacturers, importers, exporters, wholesalers, transport businesses, customs, etc. They are usually large plain buildings in industrial areas of cities and towns. They usually have loading docks to load and unload...
district. The major attractions of the district are the AT&T Bricktown Ballpark
AT&T Bricktown Ballpark
RedHawks Field at Bricktown opened in 1998 in downtown Oklahoma City's Bricktown district, replacing All Sports Stadium. It is the home of the Oklahoma City RedHawks, the AAA affiliate of the Houston Astros major league baseball team. The park seats 13,066 fans.The stadium frequently hosts the Big...
, the navigable Bricktown Canal, and the 16-screen Harkins
Harkins Theatres
Harkins Theatres is a movie theater chain with locations throughout the Southwestern United States. Harkins Theatres is privately owned and operated by its parent company, Harkins Enterprises, LLC...
movie theatre. Toby Keith's I Love This Bar & Grill
Toby Keith's I Love This Bar & Grill
Toby Keith's I Love This Bar & Grill is a restaurant and bar with multiple locations across the United States. The restaurant is named after singer Toby Keith and his #1 hit single I Love This Bar.-Current and future locations:...
is located in Bricktown, as is the corporate headquarters of Sonic Drive-In
Sonic Drive-In
Sonic Drive-In is an American drive-in fast-food restaurant chain based in Oklahoma City, Oklahoma, complete with carhops who sometimes wear rollerskates. As of August 31, 2010, there were 3,500 restaurants in 43 U.S. states. Sonic serves approximately 3 million customers daily.-1950s:Following...
.

The district's boundaries include the Oklahoma River on the south, I-235
Interstate 235 (Oklahoma)
Interstate 235 in Oklahoma is also known as the Centennial Expressway. The spur route of Interstate 35 is a 5.4-mile-long north–south spur route in central and north-central Oklahoma City. It connects northbound to U.S. Highway 77 on to suburban Edmond and southbound at Interstate 44 on to...
on the east. The district is organized by Downtown Oklahoma City, The Bricktown Urban Design Committee established by the City of Oklahoma City oversees modifications to the buildings in the Bricktown district, with an eye toward preserving its 'warehouse district' flavor while allowing commercial and retail development. The general boundary of the Bricktown Core Development District is as follows: An area bordered generally by the BNSF Railway
BNSF Railway
The BNSF Railway is a wholly owned subsidiary of Berkshire Hathaway Inc., and is headquartered in Fort Worth, Texas. It is one of seven North American Class I railroads and the second largest freight railroad network in North America, second only to the Union Pacific Railroad, its primary...
; Reno Avenue; Centennial Expressway; and the railroad right-of-way between Main and NE 1st.

Four railroad companies had freight operations east of the Santa Fe tracks in what is now Bricktown in the late 19th and early 20th century. The first brick structures, which were typically only one or two stories, appeared between 1898 and 1903. Larger brick buildings were constructed between 1903 and 1911, and the tallest brick buildings were built between 1911 and 1930. Working class houses were built nearby.

The decline of the area began with the onset of the Great Depression
Great Depression
The Great Depression was a severe worldwide economic depression in the decade preceding World War II. The timing of the Great Depression varied across nations, but in most countries it started in about 1929 and lasted until the late 1930s or early 1940s...
, which diminished businesses in the area. The growth of eastern suburbs and subsidized highways during and after World War II attracted many residents to newer housing. Railroads restructured and freight traffic moved to trucks and highways. By 1980, Bricktown had become a cluster of abandoned buildings.

In the 1990s, mayor Ron Norick persuaded Oklahoma City residents to approve a series of tax incentives to lure new businesses, but these were not sufficient. A visit to Indianapolis, Indiana
Indianapolis, Indiana
Indianapolis is the capital of the U.S. state of Indiana, and the county seat of Marion County, Indiana. As of the 2010 United States Census, the city's population is 839,489. It is by far Indiana's largest city and, as of the 2010 U.S...
, which had recently beat the city in a competition for a new airline maintenance plant, led him to believe that Oklahoma City needed a vibrant downtown. It lacked the range of activities and amenities to attract more residents and visitors. Along with Greater Oklahoma City Chamber President Ron Ackerman, Norick and their staffs developed the Metropolitan Area Projects or MAPS, which approval led to the construction of the Bricktown ballpark and a tree-lined, mile-long canal through the district, as well as other projects in downtown. The ballpark opened in 1998 and the canal opened in July of 1999. Water taxis
Taxis
A taxis is an innate behavioral response by an organism to a directional stimulus or gradient of stimulus intensity. A taxis differs from a tropism in that the organism has motility and demonstrates guided movement towards or away from the stimulus source ...
carry visitors to different stops along the canal, including many restaurants, shops and nightclubs.

The district contains a number of public sculptures and murals, including a monument to the Oklahoma Land Run
Land Run of 1889
The Oklahoma Land Rush of 1889 was the first land run into the Unassigned Lands and included all or part of the 2005 modern day Canadian, Cleveland, Kingfisher, Logan, Oklahoma, and Payne counties of the U.S. state of Oklahoma...
.

An annual Bricktown Art Festival is held in mid-July.

Amtrak's Heartland Flyer
Heartland Flyer
The Heartland Flyer is a daily passenger train that follows a 206-mile route between Fort Worth, Texas and Oklahoma City, Oklahoma. Amtrak serves as contractor, initially only for the State of Oklahoma, but now also to the State of Texas....
service to Fort Worth departs every morning from the old Santa Fe Depot, located by the west entrance to Bricktown, and returns in the evenings.