Encyclopedia
The Brevard County Manatees are a minor league baseball
Minor league baseball
Minor league baseball is a hierarchy of professional baseball leagues in the Americas that compete at levels below Major League Baseball and provide opportunities for player development. All of the minor leagues are operated as independent businesses...
team of the Florida State League
Florida State League
The Florida State League is a Class A-Advanced minor league baseball league operating in the state of Florida. They are one of three leagues currently operating in Class A-Advanced, the third highest of six classifications of minor leagues...
, and are the A-Advanced affiliate of the Milwaukee Brewers
Milwaukee Brewers
The Milwaukee Brewers are a professional baseball team based in Milwaukee, Wisconsin, currently playing in the Central Division of Major League Baseball's National League...
. They are based in Viera, Florida
Viera, Florida
Viera is a master planned community located in the central coastal region of Brevard County, Florida. It is part of an unincorporated section adjacent to the Melbourne, Florida area.-Geography:...
, and play their home games at Space Coast Stadium
Space Coast Stadium
Space Coast Stadium is a baseball stadium that was completed prior to the 1994 season as part of a plan to bring spring training for the Florida Marlins to Viera, Florida....
; built in , the park holds 8,100 fans and is also the Spring Training
Spring training
In Major League Baseball, spring training is a series of practices and exhibition games preceding the start of the regular season. Spring training allows new players to try out for roster and position spots, and gives existing team players practice time prior to competitive play...
home of the Washington Nationals
Washington Nationals
The Washington Nationals are a professional baseball team based in Washington, D.C. The Nationals are a member of the Eastern Division of the National League of Major League Baseball . The team moved into the newly built Nationals Park in 2008, after playing their first three seasons in RFK Stadium...

The Manatees will be affiliated with the Milwaukee Brewers through 2012, as the two organizations extended their player development contract (PDC) in the spring of .

Their mascot
Mascot
The term mascot – defined as a term for any person, animal, or object thought to bring luck – colloquially includes anything used to represent a group with a common public identity, such as a school, professional sports team, society, military unit, or brand name...
is known as Manny the Manatee. During the time that the team was affiliated with the Marlins, the mascot was named Hugh.

In April 2007, on "World Record First Pitch Attempt Day" the stadium was opened at 6:00 a.m. for the 7:00 p.m. game to allow each fan to throw a ceremonial first pitch. They were still short of the world record by several hundred pitches. 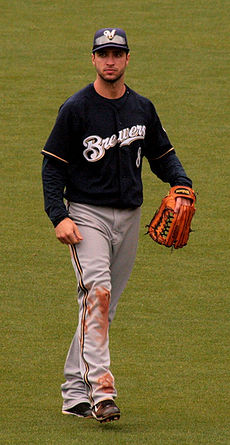