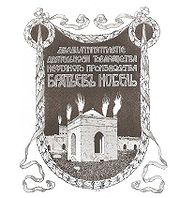 The Petroleum Production Company Nobel Brothers, Limited,or Branobel (short for cable communications meaning Nobel Brothers in Russian
Russian language
Russian is a Slavic language used primarily in Russia, Belarus, Uzbekistan, Kazakhstan, Tajikistan and Kyrgyzstan. It is an unofficial but widely spoken language in Ukraine, Moldova, Latvia, Turkmenistan and Estonia and, to a lesser extent, the other countries that were once constituent republics...
), was an oil company set up by Ludvig Nobel
Ludvig Nobel
Ludvig Immanuel Nobel was an engineer, a noted businessman and a humanitarian. One of the most prominent members of the Nobel family, he was the son of Immanuel Nobel and Alfred Nobel's older brother...
and Baron Peter von Bilderling, in Baku
Baku
Baku , sometimes spelled as Baki or Bakou, is the capital and largest city of Azerbaijan, as well as the largest city on the Caspian Sea and of the Caucasus region. It is located on the southern shore of the Absheron Peninsula, which projects into the Caspian Sea. The city consists of two principal...
, Azerbaijan
Azerbaijan
Azerbaijan , officially the Republic of Azerbaijan is the largest country in the Caucasus region of Eurasia. Located at the crossroads of Western Asia and Eastern Europe, it is bounded by the Caspian Sea to the east, Russia to the north, Georgia to the northwest, Armenia to the west, and Iran to...
. Firstly established by Robert Nobel
Robert Nobel
Robert Hjalmar Nobel was the oldest son of Immanuel Nobel and his wife Caroline Andrietta Ahlsell, brother of Ludvig and Alfred Nobel....
(25 000 rubles) and the investments of barons Peter von Bilderling (300 000 rubles) and Standertskjöld (150 000 rubles) as a distillery in 1876, it became, during the late 19th century, one of the largest oil companies in the world.

The Nobel Brothers Petroleum Company was an oil-producing company that had its origins in a distillery, founded by Robert
Robert Nobel
Robert Hjalmar Nobel was the oldest son of Immanuel Nobel and his wife Caroline Andrietta Ahlsell, brother of Ludvig and Alfred Nobel....
and Ludvig Nobel
Ludvig Nobel
Ludvig Immanuel Nobel was an engineer, a noted businessman and a humanitarian. One of the most prominent members of the Nobel family, he was the son of Immanuel Nobel and Alfred Nobel's older brother...
in Baku
Baku
Baku , sometimes spelled as Baki or Bakou, is the capital and largest city of Azerbaijan, as well as the largest city on the Caspian Sea and of the Caucasus region. It is located on the southern shore of the Absheron Peninsula, which projects into the Caspian Sea. The city consists of two principal...
in 1876, which, in 1879, turned into a shareholding company headquartered in St. Petersburg. The share capital of three million rubles was divided as follows : 53,7% Ludwig Nobel, 31,0% Baron Peter von Bilderling, 4,7% I.J. Zabelskiv, 3,8% 3,3% Alfred and Robert Nobel, 1,7% au Baron Alexandre von Bilderling. Pipeline transport
Pipeline transport
Pipeline transport is the transportation of goods through a pipe. Most commonly, liquids and gases are sent, but pneumatic tubes that transport solid capsules using compressed air are also used....
was pioneered near Baku by Vladimir Shukhov
Vladimir Shukhov
Vladimir Grigoryevich Shukhov , was a Russian engineer-polymath, scientist and architect renowned for his pioneering works on new methods of analysis for structural engineering that led to breakthroughs in industrial design of world's first hyperboloid structures, lattice shell structures, tensile...
and the Branobel company in 1878-1880. On April 10, 1902, the company signed a contract for the purchase of oil fields in Romany
Romany
Romany relates or may refer to:*The Romani people, also known as Gypsies*Romani language or Romany language, the language of the Romani people*"Romany", the pseudonym of a broadcaster and writer of Romani descent, George Bramwell Evens...
, which were owned by the oil producer Isabey Hajinsky. On October 17, 1905, in accordance with the Committee of Ministers, the company purchased the oil fields owned by oil producer A. Adamov. The company's fixed capital in 1914–1917 was 30 million ruble
Ruble
The ruble or rouble is a unit of currency. Currently, the currency units of Belarus, Russia, Abkhazia, South Ossetia and Transnistria, and, in the past, the currency units of several other countries, notably countries influenced by Russia and the Soviet Union, are named rubles, though they all are...
s. By 1916, it was the largest oil company in Russia, producing 76 million pood
Pood
Pood , is a unit of mass equal to 40 funt . It is approximately 16.38 kilograms . It was used in Russia, Belarus and Ukraine. Pood was first mentioned in a number of documents of the 12th century....
s of oil.

In 1912, was founded, in London, the Russian General Oil Corporation, which was established as an English holding company and gathered some of the most important Russian and foreign banks, united 20 companies. These included A.I. Mantashev & Co., G.M. Lianosov & Sons, Moscow-Caucasus Trade Company, Caspian Partnership, Russian Petroleum Society, Absheron Petroleum Society and others. By 1914, the fixed capital in oil was more than 120 million rubles and the Russian General Oil Corporation, buying a considerable amount of shares in the Berlin Exchange, attempted to take control over Branobel. The move was a failure and by 1916 Emanuel Nobel had bought not only a considerable share in the Russian general Oil Corporation, but also established control over other oil businesses in the region, such as Volga-Baku Company, A.I. Mantashev & Co., the Anglo-Russian Maximov Oil Company in London and G.M. Lianosov and Sons, of which he personally owned a third of the shares.

About 12% of the money left to establish the Nobel Prizes by Alfred Nobel
Alfred Nobel
Alfred Bernhard Nobel was a Swedish chemist, engineer, innovator, and armaments manufacturer. He is the inventor of dynamite. Nobel also owned Bofors, which he had redirected from its previous role as primarily an iron and steel producer to a major manufacturer of cannon and other armaments...
came from his shares in the company; he was its largest individual investor.


The Russian Revolution and Branobel

On April 28, 1920, the Bolsheviks seized power in Baku and Branobel's oil business in Azerbaijan was nationalized. In May 1920, the Nobel family
Nobel family
The Nobel family is a prominent Swedish family closely related to the history both of Sweden and of Russia in the 19th and 20th centuries. Its legacy includes its outstanding contributions to philanthropy and to the development of the armament industry and of the oil industry...
sold almost half of Branobel's shares in its possession to Standard Oil of New Jersey. At the time it was considered uncertain whether the Bolshevik
Bolshevik
The Bolsheviks, originally also Bolshevists , derived from bol'shinstvo, "majority") were a faction of the Marxist Russian Social Democratic Labour Party which split apart from the Menshevik faction at the Second Party Congress in 1903....
regime would last and the negotiation led by Gustav Nobel, on one side, and Walter C. Teagle
Walter C. Teagle
Walter Clark Teagle , was responsible for leading Standard Oil to the forefront of the oil industry and significantly expanding the company's presence in the petrochemical field.-Biography:...
, on the other, proved to be a profitable masterstroke for the Nobel family.