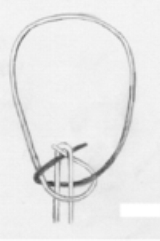 Encyclopedia
A bow string joins the two ends of the bow
Bow (weapon)
The bow and arrow is a projectile weapon system that predates recorded history and is common to most cultures.-Description:A bow is a flexible arc that shoots aerodynamic projectiles by means of elastic energy. Essentially, the bow is a form of spring powered by a string or cord...
stave and launches the arrow
Arrow
An arrow is a shafted projectile that is shot with a bow. It predates recorded history and is common to most cultures.An arrow usually consists of a shaft with an arrowhead attached to the front end, with fletchings and a nock at the other.- History:...
. Desirable properties include light weight, strength, resistance to abrasion
Abrasion (mechanical)
Abrasion is the process of scuffing, scratching, wearing down, marring, or rubbing away. It can be intentionally imposed in a controlled process using an abrasive...
, and resistance to water. Mass
Mass
Mass can be defined as a quantitive measure of the resistance an object has to change in its velocity.In physics, mass commonly refers to any of the following three properties of matter, which have been shown experimentally to be equivalent:...
has most effect at the center of the string; one gram of extra mass in the middle of the string slows the arrow about as much as 3.5 grams at the ends.

Most bow strings may be described as either simple, reverse-twisted, or looped.

Simple strings may be made of any fiber
Fiber
Fiber is a class of materials that are continuous filaments or are in discrete elongated pieces, similar to lengths of thread.They are very important in the biology of both plants and animals, for holding tissues together....
, twisted into a single cord. Such strings have been used in many parts of the world and are still effective and fairly quick to make. However, they tend to be weaker for their weight, and they may also come apart if not kept constantly under tension. They are normally secured to the bow by a knot
Knot
A knot is a method of fastening or securing linear material such as rope by tying or interweaving. It may consist of a length of one or several segments of rope, string, webbing, twine, strap, or even chain interwoven such that the line can bind to itself or to some other object—the "load"...
at each end.

Reverse-twisted strings are traditional in Europe and North America for most natural materials. Linen
Linen
Linen is a textile made from the fibers of the flax plant, Linum usitatissimum. Linen is labor-intensive to manufacture, but when it is made into garments, it is valued for its exceptional coolness and freshness in hot weather....
and hemp
Hemp
Hemp is mostly used as a name for low tetrahydrocannabinol strains of the plant Cannabis sativa, of fiber and/or oilseed varieties. In modern times, hemp has been used for industrial purposes including paper, textiles, biodegradable plastics, construction, health food and fuel with modest...
fiber have been widely used. The form is also used for modern materials. A reverse-twisted string is made of separate bundles, each bundle individually twisted in one direction; the entire group of bundles is then twisted in the other direction. The result tends to be stronger for its weight than a simple or looped string, and holds together better than a simple string. A further advantage is that the full thickness of the string passes around the nock
Nock
A nock is the notch in the end of an arrow. As a verb, it means to place an arrow on the bowstring to ready it for shooting. It may also refer to:-Surname:*Albert Jay Nock , American author...
s on the ends of the bow, where wear is usually greatest. Additional threads may also be laid in at the nocking points for the bow stave and for the arrow, which are sites of likely wear. The string may be secured to the bow by a knot at each end, usually a timber hitch
Timber hitch
The timber hitch is a knot used to attach a single length of rope to a piece of wood. This knot is easily undone after use.To make the knot, pass the rope completely around the wood. Pass the running end around the standing part, then through the loop that you have just formed. Make three turns...
, also known as the bowyer's knot.

The traditional "Flemish" string has a laid-in loop at one end, which is easier than most knots to fit over the nock of the bow when stringing and unstringing. It is more trouble to make; the short length, towards one end, that will form the loop is reverse-twisted first. The ends of each bundle are then laid in to the main length of the bundles, which are reverse-twisted in turn. The Japanese bow string is made by reverse-twisting in different directions in the core and outer layers of the string. See Kyūdō
Kyudo
, literally meaning "way of the bow", is the Japanese art of archery. It is a modern Japanese martial art and practitioners are known as .It is estimated that there are approximately half a million practitioners of kyudo today....
.

Looped strings are made of one or more continuous loops of material. Modern strings are often made as a single continuous loop: this is then served to give the final form. Disadvantages include the lesser amount of fiber at the ends, where wear is most likely; this may be overcome by serving the string.

In many parts of Asia, traditional strings have a single loop in the center, with the ends made of separate lengths tied on using a special knot. This design allows extra fiber to be used at the ends, where weight is less important and wear more likely.

Traditional materials include linen
Linen
Linen is a textile made from the fibers of the flax plant, Linum usitatissimum. Linen is labor-intensive to manufacture, but when it is made into garments, it is valued for its exceptional coolness and freshness in hot weather....
, hemp
Hemp
Hemp is mostly used as a name for low tetrahydrocannabinol strains of the plant Cannabis sativa, of fiber and/or oilseed varieties. In modern times, hemp has been used for industrial purposes including paper, textiles, biodegradable plastics, construction, health food and fuel with modest...
, other vegetable fibers, sinew, silk
Silk
Silk is a natural protein fiber, some forms of which can be woven into textiles. The best-known type of silk is obtained from the cocoons of the larvae of the mulberry silkworm Bombyx mori reared in captivity...
, and rawhide. Almost any fiber may be used in emergency. Natural fibers would be very unusual on a modern recurve bow
Recurve bow
In archery, the shape of the bow is usually taken to be the view from the side. It is the product of the complex relationship of material stresses, designed by a bowyer...
or compound bow
Compound bow
A compound bow is a modern bow that uses a levering system, usually of cables and pulleys, to bend the limbs.The limbs of a compound bow are much stiffer than those of a recurve bow or longbow. This limb stiffness makes the compound bow more energy-efficient than other bows, in conjunction with the...
, but are still effective and still used on traditional wooden or composite bow
Composite bow
A composite bow is a bow made from horn, wood, and sinew laminated together. The horn is on the belly, facing the archer, and sinew on the back of a wooden core. Sinew and horn will store more energy than wood for the same length of bow...
s. Sinew and hide strings may be seriously affected by water.

Widely-used modern materials are stronger for their weight than any natural material, and most are unaffected by water. They include:

Dacron B50
Polyethylene terephthalate
Polyethylene terephthalate , commonly abbreviated PET, PETE, or the obsolete PETP or PET-P, is a thermoplastic polymer resin of the polyester family and is used in synthetic fibers; beverage, food and other liquid containers; thermoforming applications; and engineering resins often in combination...
- (strength per strand = 22.5 kg. , stretch = 2.6%), a polyester material. Because of its durability and stretch, Dacron is commonly used on beginners' equipment, wooden bows, and older bows. The relatively high stretch causes less shock to the bow, which is an important consideration for wooden-handled recurves. Dacron strings are easy to maintain and can last several years.

Kevlar
Kevlar
Kevlar is the registered trademark for a para-aramid synthetic fiber, related to other aramids such as Nomex and Technora. Developed at DuPont in 1965, this high strength material was first commercially used in the early 1970s as a replacement for steel in racing tires...
7-11 - (strength per strand = 31.8 kg. , stretch = 0.8%), also known as Aramid
Aramid
Aramid fibers are a class of heat-resistant and strong synthetic fibers. They are used in aerospace and military applications, for ballistic rated body armor fabric and ballistic composites, in bicycle tires, and as an asbestos substitute. The name is a portmanteau of "aromatic polyamide"...
, is a liquid crystal polymer
Polymer
A polymer is a large molecule composed of repeating structural units. These subunits are typically connected by covalent chemical bonds...
material with a higher density and smaller diameter than Dacron, which results in a faster arrow speed (approximately 2 metres per second faster).
There are two problems with this material. First, its limited stretch causes increased stress in the bow limbs. Secondly, a Kevlar bowstring may only last 1000 shots before breaking as it tends to fatigue due to bending at the nocking point. Failure tends to be sudden rather than gradual.

Fastflight - (strength per strand = 45.5 kg. , stretch = 1.0%), introduced in the 1990s, is a high modulus polyethylene
Ultra high molecular weight polyethylene
Ultra-high-molecular-weight polyethylene , also known as high-modulus polyethylene or high-performance polyethylene , is a subset of the thermoplastic polyethylene. It has extremely long chains, with molecular weight numbering in the millions, usually between 2 and 6 million...
material, also known as Spectra
Spectra Shield
Spectra Shield is a composite material used in bulletproof vests and vehicle armour. It is manufactured by Honeywell....
, which results in a "plastic" look and feel. It is very slippery, so the servings have to be wrapped very tightly to prevent sliding. Special serving material has been developed to help overcome this problem. Fastflight has largely displaced liquid crystal polymers like Kevlar for bowstrings as it is more durable and fails more gradually.

In 2006, all US-based Spectra production facilities were requisitioned by the US Government, since Spectra is also used in body armor. Production of Spectra-based Fastflight has thus ceased, but the manufacturer (Brownell) has launched several alternatives, such as the Dyneema-based Fastflight Plus.

Fastflight S4 - (strength per strand = 73 kg. , stretch = less than 1.0%) is made from a composite of 50% Fastflight and 50% Vectran
Vectran
Vectran is a manufactured fibre, spun from a liquid crystal polymer created by Celanese Acetate LLC and now manufactured by Kuraray Co., Ltd. Chemically it is an aromatic polyester produced by the polycondensation of 4-hydroxybenzoic acid and 6-hydroxynaphthalene-2-carboxylic acid.- Properties...
making the strands thicker. Therefore approximately half the number of strands are required as for a Fastflight string. Vectran is a liquid crystal polymer similar to Kevlar. Mixing it with Fastflight avoids many of the durability problems associated with liquid crystal polymers.

Serving a bow string refers to the use of an additional thread, commonly wrapped round the main string at the nocking points where abrasion is most likely, and also used on looped strings to keep the two sides of the loop together.
The source of this article is wikipedia, the free encyclopedia.  The text of this article is licensed under the GFDL.