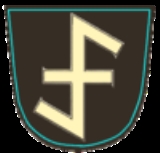 Encyclopedia
Bornheim is a district or Stadtteil of Frankfurt am Main, Germany
Germany
Germany , officially the Federal Republic of Germany , is a federal parliamentary republic in Europe. The country consists of 16 states while the capital and largest city is Berlin. Germany covers an area of 357,021 km2 and has a largely temperate seasonal climate...
, with approximately 25,861 inhabitants. It is part of the Ortsbezirk Innenstadt IV, and is subdivided into 5 Stadtbezirke.

In the past, Bornheim was called Das lustige Dorf ("The merry village"), because it was the red-light district
Red-light district
A red-light district is a part of an urban area where there is a concentration of prostitution and sex-oriented businesses, such as sex shops, strip clubs, adult theaters, etc...
of Frankfurt up to some 120 years ago. It still retains some of its lively charm and is said to be the younger crowd's hangout, next to Sachsenhausen
Sachsenhausen (Frankfurt am Main)
Sachsenhausen is a part of the city of Frankfurt, Germany. Composed of two districts: Sachsenhausen-Nord and Sachsenhausen-Süd, it is part of the Ortsbezirk Süd. It is located on the South bank of the Main river, right in the city center, opposite the Old Town.Sachsenhausen was founded as...
. The main street of Bornheim is Berger Straße, a cosmopolitan boulevard with many bars, pubs and restaurants and two of Frankfurt's most traditional cider
Cider
Cider or cyder is a fermented alcoholic beverage made from apple juice. Cider varies in alcohol content from 2% abv to 8.5% abv or more in traditional English ciders. In some regions, such as Germany and America, cider may be termed "apple wine"...
houses, Solzer and Zur Sonne. Holy Cross Church
Holy Cross Church, Frankfurt-Bornheim
The Holy Cross Church is a Roman Catholic church in the district Bornheim of Frankfurt am Main . It was built by Martin Weber from 1928 to 1929, on a rise then known as Bornheimer Hang...
, known for its modernist architecture, is located in Bornheim.