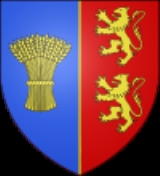 Encyclopedia
Bois-Guillaume is a commune
Communes of France
The commune is the lowest level of administrative division in the French Republic. French communes are roughly equivalent to incorporated municipalities or villages in the United States or Gemeinden in Germany...
in the Seine-Maritime
Seine-Maritime
Seine-Maritime is a French department in the Haute-Normandie region in northern France. It is situated on the northern coast of France, at the mouth of the Seine, and includes the cities of Rouen and Le Havre...
department in the Haute-Normandie
Haute-Normandie
Upper Normandy is one of the 27 regions of France. It was created in 1984 from two départements: Seine-Maritime and Eure, when Normandy was divided into Lower Normandy and Upper Normandy. This division continues to provoke controversy, and some continue to call for reuniting the two regions...
region
Régions of France
France is divided into 27 administrative regions , 22 of which are in Metropolitan France, and five of which are overseas. Corsica is a territorial collectivity , but is considered a region in mainstream usage, and is even shown as such on the INSEE website...
in northern France
France
The French Republic , The French Republic , The French Republic , (commonly known as France , is a unitary semi-presidential republic in Western Europe with several overseas territories and islands located on other continents and in the Indian, Pacific, and Atlantic oceans. Metropolitan France...
.

The town is a wealthy, residential hilltop suburb of Rouen
Rouen
Rouen , in northern France on the River Seine, is the capital of the Haute-Normandie region and the historic capital city of Normandy. Once one of the largest and most prosperous cities of medieval Europe , it was the seat of the Exchequer of Normandy in the Middle Ages...
, semi-rural, semi-suburban with a little farming and some light industry
Light industry
Light industry is usually less capital intensive than heavy industry, and is more consumer-oriented than business-oriented...
. It is considered part of Greater Rouen, being just 3 miles (4.8 km) to the northeast, at the junction of the D43 and the D928 roads.

Bois-Guillaume was originally a Gallo-Roman settlement of which few traces remain. In 1040, William the Conqueror's mother built a country house on the hill; the area thus came to be known variously as Boscum Guillelmi or Bosco Willelmi, later becoming Bois-Guillaume.
By 1892, the town was large enough to split into two, thus creating the neighboring commune of Bihorel
Bihorel
-Population:-Places of interest:* The church of Notre-Dame, dating from the nineteenth century.* A seventeenth century manor house.-Notable people:* Jules Michelet historian, stayed here many times....
.