Encyclopedia
Blida is a city in Algeria
Algeria
Algeria , officially the People's Democratic Republic of Algeria , also formally referred to as the Democratic and Popular Republic of Algeria, is a country in the Maghreb region of Northwest Africa with Algiers as its capital.In terms of land area, it is the largest country in Africa and the Arab...
. It is the capital of Blida Province
Blida Province
Blida is a province in Algeria. Its capital is Blida. The Chréa National Park is situated here.-Administrative divisions:It is made up of 10 districts and 25 municipalities.The districts are:# Blida# Boufarik# Bougara# Bouïnian...
, and it is located about 45 km south-west of Algiers
Algiers
' is the capital and largest city of Algeria. According to the 1998 census, the population of the city proper was 1,519,570 and that of the urban agglomeration was 2,135,630. In 2009, the population was about 3,500,000...
, the national capital. The name Blida, i.e. bulaydah, diminutive of the arab
Arab
Arab people, also known as Arabs , are a panethnicity primarily living in the Arab world, which is located in Western Asia and North Africa. They are identified as such on one or more of genealogical, linguistic, or cultural grounds, with tribal affiliations, and intra-tribal relationships playing...
word belda, city.

Blida lies surrounded with orchards and gardens, 190 metres (623.4 ft) above the sea, at the base of the Tell Atlas
Tell Atlas
The Tell Atlas is a mountain chain over 1,500 kilometers in length, belonging to the Atlas mountain ranges in North Africa, stretching from Morocco, through Algeria to Tunisia. It parallels the Mediterranean coast...
, on the southern edge of the fertile Mitidja Plain, and the right bank of the Oued el kebir outflow from the Chiffa
Chiffa
Chiffa is a town and gorge in the Tell Atlas Mountains of northern Algeria. This gorge is one of the few habitat areas in Algeria that supports a sub-population of the Barbary Macaque, Macaca sylvanus....
gorge. The abundant water of this stream provides power for large corn mills and several factories, and also supplies the town, with its numerous fountains and irrigated gardens. Blida is surrounded by a wall of considerable extent, pierced by six gates, and is further defended by Port Mimieh, crowning a steep hill on the left bank of the river.

The nearby Chiffa
Chiffa
Chiffa is a town and gorge in the Tell Atlas Mountains of northern Algeria. This gorge is one of the few habitat areas in Algeria that supports a sub-population of the Barbary Macaque, Macaca sylvanus....
gorge is a habitat of the endangered Barbary Macaque
Barbary Macaque
The Barbary Macaque , or Common macaque, is a macaque with no tail. Found in the Atlas Mountains of Algeria and Morocco with a small population, of unknown origin, in Gibraltar, the Barbary Macaque is one of the best-known Old World monkey species. Besides humans, they are the only primates that...
, Macaca sylvanus; this habitat
Habitat
* Habitat , a place where a species lives and grows*Human habitat, a place where humans live, work or play** Space habitat, a space station intended as a permanent settlement...
is one of only a few relict locations where populations of this primate are found. 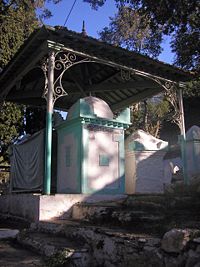 The present town, French in character, has well-built modern streets with many arcades, and numbers among its buildings several mosques and churches, extensive barracks and a large military hospital. The principal square, the place d'Armes, is surrounded by arcaded houses and shaded by trees. The centre of a fertile district, and a post on one of the main routes in the country, Blida has a flourishing trade, chiefly in oranges and flour. The orange groves contain over 50,000 trees, and in April the air for miles round is laden with the scent of the orange blossoms. In the public gardens is a group of magnificent olive trees. The products of the neighbouring cork trees and cedar groves are a source of revenue to the town.
Sidi-Ahmed El-Kebir, Blida’s founder, is buried in Sidi El-Kebir (an area named after him). He founded Blida in the 16th century. 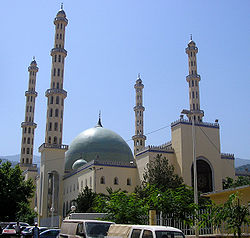 The city occupies the site of a military station in the time of the Romans, but the present town appears to date from the 16th century. A mosque was built by order of Khair-ed-din Barbarossa, and under the Turks the town was of some importance. In 1825 it was nearly destroyed by an earthquake, but was speedily re-erected on a site about a mile distant from the ruins. It was intricately rebuilt of interconnecting alleyways and streets, and was made accessible through the existing six major gates. The gates were as follows:
Nowadays, those gates no longer exist, but their names are still in use by people in Blida as reference points to locate streets, places, schools and businesses.
The source of this article is wikipedia, the free encyclopedia.  The text of this article is licensed under the GFDL.