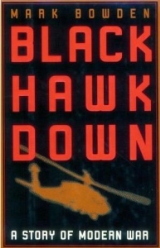 Encyclopedia
Black Hawk Down: A Story of Modern War is a 1999
1999 in literature
The year 1999 in literature involved some significant events and new books.-Events:*June 19 - Stephen King is hit by a Dodge van while taking a walk. He spends the next three weeks hospitalized...
book by Mark Bowden
Mark Bowden
Not to be confused with Mark Bowden, U.N. Resident & Humanitarian Coordinator and UNDP Resident Representative for Somalia.Mark Robert Bowden is an American writer and a contributing editor at Vanity Fair. Born in St. Louis, Missouri, he is a 1973 graduate of Loyola University Maryland...
that chronicles the United States
United States
The United States of America is a federal constitutional republic comprising fifty states and a federal district...
Army Rangers
United States Army Rangers
United States Army Rangers are elite members of the United States Army. Rangers have served in recognized U.S. Army Ranger units or have graduated from the U.S. Army's Ranger School...
, 160th Special Operations Aviation Regiment, 10th Mountain Division
10th Mountain Division
The 10th Mountain Division is a light infantry division of the United States Army based at Fort Drum, New York. It is a subordinate unit of the XVIII Airborne Corps and the only division-sized element of the U.S. Army to specialize in fighting under harsh terrain and weather conditions...
, Delta Force
Delta Force
1st Special Forces Operational Detachment-Delta is one of the United States' secretive Tier One counter-terrorism and Special Mission Units. Commonly known as Delta Force, Delta, or The Unit, it was formed under the designation 1st SFOD-D, and is officially referred to by the Department of Defense...
, Navy SEALs
United States Navy SEALs
The United States Navy's Sea, Air and Land Teams, commonly known as Navy SEALs, are the U.S. Navy's principal special operations force and a part of the Naval Special Warfare Command as well as the maritime component of the United States Special Operations Command.The acronym is derived from their...
, and UN forces attempt to capture Somali
Somalia
Somalia , officially the Somali Republic and formerly known as the Somali Democratic Republic under Socialist rule, is a country located in the Horn of Africa. Since the outbreak of the Somali Civil War in 1991 there has been no central government control over most of the country's territory...
warlord
Warlord
A warlord is a person with power who has both military and civil control over a subnational area due to armed forces loyal to the warlord and not to a central authority. The term can also mean one who espouses the ideal that war is necessary, and has the means and authority to engage in war...
Mohamed Farrah Aidid
Mohamed Farrah Aidid
General Mohamed Ali Farrah Aidid was a controversial Somali military leader, often described as a warlord. A former general and diplomat, he was the chairman of the United Somali Congress and later led the Somali National Alliance...
in Mogadishu
Mogadishu
Mogadishu , popularly known as Xamar, is the largest city in Somalia and the nation's capital. Located in the coastal Benadir region on the Indian Ocean, the city has served as an important port for centuries....
and the intense battle that resulted between U.S. forces and local militia
Militia
The term militia is commonly used today to refer to a military force composed of ordinary citizens to provide defense, emergency law enforcement, or paramilitary service, in times of emergency without being paid a regular salary or committed to a fixed term of service. It is a polyseme with...
and citizens. One of the key events is the downing of a UH-60 Black Hawk, from which the book derives its title, and the subsequent attempt to rescue its crew.

The raid
Raid (military)
Raid, also known as depredation, is a military tactic or operational warfare mission which has a specific purpose and is not normally intended to capture and hold terrain, but instead finish with the raiding force quickly retreating to a previous defended position prior to the enemy forces being...
quickly became the most intensive close combat
Close quarters battle
Close quarters combat or close quarters battle is a type of fighting in which small units engage the enemy with personal weapons at very short range, potentially to the point of hand-to-hand combat or fighting with hand weapons such as swords or knives...
in the military history of the United States
Military history of the United States
The military history of the United States spans a period of over two centuries. During the course of those years, the United States evolved from a new nation fighting the British Empire for independence without a professional military , through a monumental American Civil War to the world's sole...
since the Vietnam War
Vietnam War
The Vietnam War was a Cold War-era military conflict that occurred in Vietnam, Laos, and Cambodia from 1 November 1955 to the fall of Saigon on 30 April 1975. This war followed the First Indochina War and was fought between North Vietnam, supported by its communist allies, and the government of...
. The events of the raid were later renamed the Battle of Mogadishu by international media, as opposed to the operation's name of Gothic Serpent
Operation Gothic Serpent
Operation Gothic Serpent was a military operation conducted by special operations forces of the United States with the primary mission of capturing warlord Mohamed Farrah Aidid...
.

Bowden is not a historian
Historian
A historian is a person who studies and writes about the past and is regarded as an authority on it. Historians are concerned with the continuous, methodical narrative and research of past events as relating to the human race; as well as the study of all history in time. If the individual is...
, but a journalist
Journalism
Journalism is the practice of investigation and reporting of events, issues and trends to a broad audience in a timely fashion. Though there are many variations of journalism, the ideal is to inform the intended audience. Along with covering organizations and institutions such as government and...
, and, as such, writes his account of the battle as a narrative
Narrative
A narrative is a constructive format that describes a sequence of non-fictional or fictional events. The word derives from the Latin verb narrare, "to recount", and is related to the adjective gnarus, "knowing" or "skilled"...
, rather like a novel. Though organized like a novel, the book is drawn from actual events. Bowden's sources included extensive research, interviews with participants from both sides of the conflict, footage recorded by observation aircraft, and recordings of radio traffic.