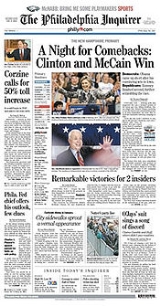 Overview
The Philadelphia Inquirer is a morning daily newspaper
Newspaper
A newspaper is a scheduled publication containing news of current events, informative articles, diverse features and advertising. It usually is printed on relatively inexpensive, low-grade paper such as newsprint. By 2007, there were 6580 daily newspapers in the world selling 395 million copies a...
that serves the Philadelphia, Pennsylvania
Pennsylvania
The Commonwealth of Pennsylvania is a U.S. state that is located in the Northeastern and Mid-Atlantic regions of the United States. The state borders Delaware and Maryland to the south, West Virginia to the southwest, Ohio to the west, New York and Ontario, Canada, to the north, and New Jersey to...
, metropolitan area
Delaware Valley
The Delaware Valley is a term used to refer to the valley where the Delaware River flows, along with the surrounding communities. This includes the metropolitan area centered on the city of Philadelphia. Such educational institutions as Delaware Valley Regional High School in Alexandria Township...
of the United States. The newspaper was founded by John R. Walker and John Norvell
John Norvell
John Norvell was a newspaper editor and one of the first U.S. Senators from Michigan.-History:Norvell was born in Danville, Kentucky, then still a part of Virginia, where he attended the common schools....
in June 1829 as The Pennsylvania Inquirer and is the third-oldest surviving daily newspaper in the United States. Owned by Philadelphia Media Network
Philadelphia Media Network
Philadelphia Media Network is an American media company. It owns The Philadelphia Inquirer, Philadelphia Daily News and the web portal Philly.com, acquiring out of Chapter 11 bankruptcy protection from the prior owner, Philadelphia Media Holdings....
, The Inquirer has the eleventh largest average weekday U.S. newspaper circulation
Newspaper circulation
A newspaper's circulation is the number of copies it distributes on an average day. Circulation is one of the principal factors used to set advertising rates. Circulation is not always the same as copies sold, often called paid circulation, since some newspapers are distributed without cost to the...
and has won eighteen Pulitzer Prize
Pulitzer Prize
The Pulitzer Prize is a U.S. award for achievements in newspaper and online journalism, literature and musical composition. It was established by American publisher Joseph Pulitzer and is administered by Columbia University in New York City...
s.

The paper has risen and fallen in prominence throughout its history.

WHERE IS PRINCE VALIANT, HOW CAN HE NOT BE IN THE SUNDAY COMICS? IT MUST BE SOME KIND OF PLOT. I THINK I WILL BOYCOT THE PAPER TILL HE RETURNS. THANK...

On what date did the Philadelphia Inquirer print the article announcing Lincoln's signing of the Emancipation Proclamation?
More
x