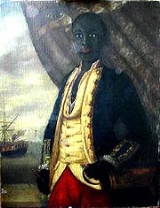 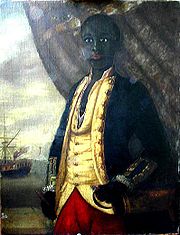 "Black Admiral" is the colloquial name for a Revolutionary War
American Revolutionary War
The American Revolutionary War , the American War of Independence, or simply the Revolutionary War, began as a war between the Kingdom of Great Britain and thirteen British colonies in North America, and ended in a global war between several European great powers.The war was the result of the...
-era U.S.
United States
The United States of America is a federal constitutional republic comprising fifty states and a federal district...
painting of unknown provenance that appears to depict a black
Black people
The term black people is used in systems of racial classification for humans of a dark skinned phenotype, relative to other racial groups.Different societies apply different criteria regarding who is classified as "black", and often social variables such as class, socio-economic status also plays a...
man in U.S. naval uniform
United States Navy
The United States Navy is the naval warfare service branch of the United States Armed Forces and one of the seven uniformed services of the United States. The U.S. Navy is the largest in the world; its battle fleet tonnage is greater than that of the next 13 largest navies combined. The U.S...
. In 2006, it was revealed that this 18th century painting was merely a white sailor overlaid in the mid-to-late 20th century with African features.

The painting has often been featured in U.S. books and exhibitions on African-American history and the American Revolution
American Revolution
The American Revolution was the political upheaval during the last half of the 18th century in which thirteen colonies in North America joined together to break free from the British Empire, combining to become the United States of America...
, as it was thought to show a real black sailor, possibly belonging to a crew that had evacuated General George Washington
George Washington
George Washington was the dominant military and political leader of the new United States of America from 1775 to 1799. He led the American victory over Great Britain in the American Revolutionary War as commander-in-chief of the Continental Army from 1775 to 1783, and presided over the writing of...
from Long Island after the Battle of Brooklyn. For example, the painting appears in Gary B. Nash's book The Unknown American Revolution (2005), where it is identified as Black Privateer, ca. 1780, with the caption: "This black sailor very likely served on a privateer
Privateer
A privateer is a private person or ship authorized by a government by letters of marque to attack foreign shipping during wartime. Privateering was a way of mobilizing armed ships and sailors without having to spend public money or commit naval officers...
that took many enemy prizes, because only his share of the prize money would have allowed him to dress in such finery" (p. 227).

In 2006, however, the painting's owner, Alexander McBurney, decided to have it restored before lending it to the Fraunces Tavern
Fraunces Tavern
Fraunces Tavern is a tavern, restaurant and museum housed in a conjectural reconstruction of a building that played a prominent role in pre-Revolution and American Revolution history. The building, located at 54 Pearl Street at the corner of Broad Street, has been owned by Sons of the Revolution in...
Museum as the centerpiece of its “Fighting for Freedom: Black Patriots and Loyalists” exhibition. McBurney had purchased the painting from an art dealer in 1975 for $1,300, and before restoring it had it assessed for insurance purposes at $300,000. He hired Peter Williams, an art conservator, for the task. The restoration revealed that the sailor in the original painting was actually white, but had been painted over, probably sometime in the early 1970s. The alteration was probably intentionally fraudulent, according to Williams, because steps were taken to obscure the freshness of the changes.
The painting's estimated market value has plummeted to $3,000, and McBurney decided to have it "restored" to the appearance of the Black Admiral and keep it as a family keepsake.