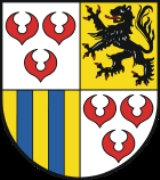 The district was a swampy and unpopulated area in the early Middle Ages. In the 12th century Flemish settlers helped to drain the swamps. In that time Bitterfeld was known as "the Flemish town" in the region. The present district is roughly identical with the old county of Brehna, which ruled the area from the 10th to the 13th century. Later the region became a part of Saxony
Saxony
The Free State of Saxony is a landlocked state of Germany, contingent with Brandenburg, Saxony Anhalt, Thuringia, Bavaria, the Czech Republic and Poland. It is the tenth-largest German state in area, with of Germany's sixteen states....
.

When Prussia
Prussia
Prussia was a German kingdom and historic state originating out of the Duchy of Prussia and the Margraviate of Brandenburg. For centuries, the House of Hohenzollern ruled Prussia, successfully expanding its size by way of an unusually well-organized and effective army. Prussia shaped the history...
gained the northern parts of Saxony (including the lands around Bitterfeld), the district of Bitterfeld was established. After the dissolution of Anhalt
Anhalt
Anhalt was a sovereign county in Germany, located between the Harz Mountains and the river Elbe in Middle Germany. It now forms part of the state of Saxony-Anhalt.- Dukes of Anhalt :...
some places in the north were added to the district.

The East German government tried to establish a socialistic industrial centre in the Bitterfeld region. The city of Bitterfeld and the entire district were infamous for polluted air, poisoned rivers and devastated landscape. After the German reunification
German reunification
German reunification was the process in 1990 in which the German Democratic Republic joined the Federal Republic of Germany , and when Berlin reunited into a single city, as provided by its then Grundgesetz constitution Article 23. The start of this process is commonly referred by Germans as die...
there have been measures to change these conditions. Today the power plants work with modern filters, and sewage works greatly improve the water conditions.