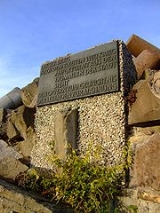 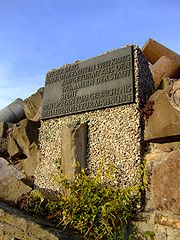 The Birkenkopf is a hill of height 511m within Stuttgart
Stuttgart
Stuttgart is the capital of the state of Baden-Württemberg in southern Germany. The sixth-largest city in Germany, Stuttgart has a population of 600,038 while the metropolitan area has a population of 5.3 million ....
. It is the highest point of the inner regions of Stuttgart and is almost 300m higher than the river Neckar
Neckar
The Neckar is a long river, mainly flowing through the southwestern state of Baden-Württemberg, but also a short section through Hesse, in Germany. The Neckar is a major right tributary of the River Rhine...
on which Stuttgart lies. The hill lies in the Stuttgart-West city region. It is in part a Schuttberg
Schuttberg
Schuttberg is a German term for a mound made of rubble or out of a rubbish heap.Many were amassed following the extensive damage from strategic bombing during World War II...
, an artificial hill built from the ruins and rubble from World War II
World War II
World War II, or the Second World War , was a global conflict lasting from 1939 to 1945, involving most of the world's nations—including all of the great powers—eventually forming two opposing military alliances: the Allies and the Axis...
.

Between 1953 and 1957, 15 million cubic metres of rubble from 53 bombing missions during World War II were built on top of the hill, which resulted in an increase in height of around 40 metres. At the summit there are many recognisable facades from the ruined buildings. The locals colloquially call the Birkenkopf "Monte Scherbelino", which roughly translates as "Mount Shards" but in childlike language. One of the pieces of rubble has a plaque
Commemorative plaque
A commemorative plaque, or simply plaque, is a plate of metal, ceramic, stone, wood, or other material, typically attached to a wall, stone, or other vertical surface, and bearing text in memory of an important figure or event...
attached to it, which says: Dieser Berg nach dem Zweiten Weltkrieg aufgetürmt aus den Trümmern der Stadt steht den Opfern zum Gedächtnis den Lebenden zur Mahnung. This translates roughly as: This mountain was built after the Second World War from the rubble of the town to stand as a memorial of the dead and a warning to the living.

From the summit the whole city centre can be seen, and on a clear day the view extends to the Swabian Alb
Swabian Alb
The Swabian Alps or Swabian Jura is a low mountain range in Baden-Württemberg, Germany, extending 220 km from southwest to northeast and 40 to 70 km in width. It is named after the region of Swabia....
, to the Black Forest
Black Forest
The Black Forest is a wooded mountain range in Baden-Württemberg, southwestern Germany. It is bordered by the Rhine valley to the west and south. The highest peak is the Feldberg with an elevation of 1,493 metres ....
, and the lowlands of Württemberg
Württemberg
Württemberg , formerly known as Wirtemberg or Wurtemberg, is an area and a former state in southwestern Germany, including parts of the regions Swabia and Franconia....
. On the summit there is a steel cross, which in 2003 replaced the original 1953 wooden cross. In the summer, early morning services are sometimes held here.