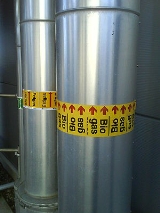 Overview
Biogas typically refers to a gas
Gas
Gas is one of the three classical states of matter . Near absolute zero, a substance exists as a solid. As heat is added to this substance it melts into a liquid at its melting point , boils into a gas at its boiling point, and if heated high enough would enter a plasma state in which the electrons...
produced by the biological breakdown of organic matter
Organic matter
Organic matter is matter that has come from a once-living organism; is capable of decay, or the product of decay; or is composed of organic compounds...
in the absence of oxygen
Oxygen
Oxygen is the element with atomic number 8 and represented by the symbol O. Its name derives from the Greek roots ὀξύς and -γενής , because at the time of naming, it was mistakenly thought that all acids required oxygen in their composition...
. Organic waste such as dead plant and animal material, animal dung, and kitchen waste can be converted into a gaseous fuel called biogas. Biogas originates from biogenic material and is a type of biofuel
Biofuel
Biofuel is a type of fuel whose energy is derived from biological carbon fixation. Biofuels include fuels derived from biomass conversion, as well as solid biomass, liquid fuels and various biogases...
.

Biogas is produced by the anaerobic digestion
Anaerobic digestion
Anaerobic digestion is a series of processes in which microorganisms break down biodegradable material in the absence of oxygen. It is used for industrial or domestic purposes to manage waste and/or to release energy....
or fermentation
Fermentation (biochemistry)
Fermentation is the process of extracting energy from the oxidation of organic compounds, such as carbohydrates, using an endogenous electron acceptor, which is usually an organic compound. In contrast, respiration is where electrons are donated to an exogenous electron acceptor, such as oxygen,...
of biodegradable materials such as biomass
Biomass
Biomass, as a renewable energy source, is biological material from living, or recently living organisms. As an energy source, biomass can either be used directly, or converted into other energy products such as biofuel....
, manure
Manure
Manure is organic matter used as organic fertilizer in agriculture. Manures contribute to the fertility of the soil by adding organic matter and nutrients, such as nitrogen, that are trapped by bacteria in the soil...
, sewage
Sewage
Sewage is water-carried waste, in solution or suspension, that is intended to be removed from a community. Also known as wastewater, it is more than 99% water and is characterized by volume or rate of flow, physical condition, chemical constituents and the bacteriological organisms that it contains...
, municipal waste, green waste
Green waste
Green waste is biodegradable waste that can be composed of garden or park waste, such as grass or flower cuttings and hedge trimmings, as well as domestic and commercial food waste...
, plant material, and crops.

Are there generators that uses biogas outthere? iwant one that can use a3kw radio transmitter in arural area
More