Encyclopedia
Billings Bridge is a bridge over the Rideau River
Rideau River
thumb|Rapids on the Rideau River opposite [[Carleton University]].The Rideau River is a Southern Ontario river which flows north from Upper Rideau Lake and empties into the Ottawa River at Rideau Falls in Ottawa, Ontario. Its length is 146 km...
in Ottawa
Ottawa
Ottawa is the capital of Canada, the second largest city in the Province of Ontario, and the fourth largest city in the country. The city is located on the south bank of the Ottawa River in the eastern portion of Southern Ontario...
. Bank Street
Bank Street (Ottawa)
Bank Street is the major north-south road in Ottawa, Ontario, Canada. It runs south from Wellington Street in downtown Ottawa, south through the neighbourhoods of Centretown, The Glebe, Old Ottawa South, Alta Vista, Hunt Club, and then through the villages of Blossom Park, Leitrim, South...
passes over the river by way of this bridge. The bridge was named after Braddish Billings
Braddish Billings
Braddish Billings was an early settler in the Ottawa area.He was born in Ware, Massachusetts in 1783, but moved to the Brockville area with his family when he was 9. He later worked cutting down the white pine along the Ottawa River and transporting the logs down river...
, who settled in this area and established a farm nearby in 1812. The first bridge, originally called Farmers Bridge, was built over the river here in 1830. The current bridge was built in 1916. 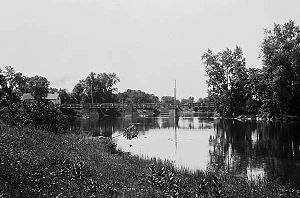