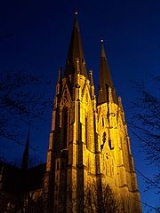 Encyclopedia
Billerbeck is a municipality in the district of Coesfeld
Coesfeld (district)
Coesfeld is a Kreis in the northwestern part of North Rhine-Westphalia, Germany, west of the city of Münster. Neighboring districts are Steinfurt, district-free Münster, Warendorf, district-free Hamm, Unna, Recklinghausen, Borken.- History :...
in North Rhine-Westphalia
North Rhine-Westphalia
North Rhine-Westphalia is the most populous state of Germany, with four of the country's ten largest cities. The state was formed in 1946 as a merger of the northern Rhineland and Westphalia, both formerly part of Prussia. Its capital is Düsseldorf. The state is currently run by a coalition of the...
in Germany
Germany
Germany , officially the Federal Republic of Germany , is a federal parliamentary republic in Europe. The country consists of 16 states while the capital and largest city is Berlin. Germany covers an area of 357,021 km2 and has a largely temperate seasonal climate...
.


Growth due to law acts

26 Seats of the town council were given to different parties at local elections on 26 September 2004:

The Coat of Arms shows the three rivers Berkel
Berkel
The Berkel is a river in the Netherlands and Germany. It is a right tributary of the River IJssel.The river rises in Billerbeck, near the German city of Münster in North Rhine-Westphalia, and crosses the border with the Netherlands near Vreden and Rekken...
, Haulingbach and Lilienbeck in silver on blue background. Its origin can be traced back to the medieval Knights of Billerbeck.

In 1950 the citizens Alex Hesselmann and Bernhard Engbers founded the open air-theatre of Billerbeck. It is well known for its high class acting, given that there are only non-professional actors.

The Kolvenburg comprises building parts from the 15th and 16th centuries. This kind of mansion with its half-hipp roof
Hip roof
A hip roof, or hipped roof, is a type of roof where all sides slope downwards to the walls, usually with a fairly gentle slope. Thus it is a house with no gables or other vertical sides to the roof. A square hip roof is shaped like a pyramid. Hip roofs on the houses could have two triangular side...
is a typical housing of the lower nobility of the Münsterland. Today it is the cultural centre of the district of Coesfeld showing changing exhibitions. 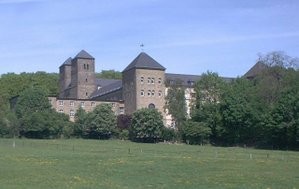 Billerbeck is located on the train line from Münster to Coesfeld
Coesfeld
Coesfeld is the capital of the district of Coesfeld in the German state of North Rhine-Westphalia.-History:Coesfeld received its city rights in 1197, but was first recorded earlier than that in the biography of St. Ludger, patron and first bishop of the diocese of Munster who was born north of...
, the so called "tree hills line" ("Baumbergebahn"). The modernised station building offers a café for cultural Events and a bicycle rental station.

A further train station in Billerbeck is located in Lutum, which is a countryside train station. The town of Billerbeck is part of the public transport association of the Münsterland VGM. Therefore some bus lines also stop at Billerbeck, connecting the town to its neighbouring towns and cities.

The biggest employer in Billerbeck is the company Dr. Suwelack founded by Wolfgang Suwelack and which employs 410 staff. It is working on the sector of nutrition production and skin care. It is also operating one of the most advanced and biggest nutriton shockfrosting sites in Europe.
A medium-sized metal-working industry can be found there as well as several trading companies, and service industry (e.g. 7 haircutters, 3 undertakers and a filmproduction company).

Billerbeck is an important centre of tourism as it is only half-an-hour away for the 7 million people of the Rhein-Ruhr-Area and it is also a place of pilgrimage as Ludger
Ludger
Saint Ludger was a missionary among the Frisians and Saxons, founder of Werden Abbey and first Bishop of Münster in Westphalia....
, the first bishop of Münster, died there in the year 809. Last but not least cycling is very popular in the region which is manifested in 800 kilometres of bicycle and pedestrian streets. For these reasons the gastronomy is well developed and offers a great variety related to the city's number of inhabitants.

In Billerbeck there are the Grundschule (basic school - school years 1-4) at two locations, the Realschule
Realschule
The Realschule is a type of secondary school in Germany, Austria, Switzerland, and Liechtenstein. It has also existed in Croatia , Denmark , Sweden , Hungary and in the Russian Empire .-History:The Realschule was an outgrowth of the rationalism and empiricism of the seventeenth and...
(secondary modern school/junior high - 5-10) and a Hauptschule
Hauptschule
A Hauptschule is a secondary school in Germany and Austria, starting after 4 years of elementary schooling, which offers Lower Secondary Education according to the International Standard Classification of Education...
(secondary school - 5-10). 5 Kindergartens and 2 day care units are operated in the city.

In Billerbeck there are Roman Catholic and Evangelical
Evangelicalism
Evangelicalism is a Protestant Christian movement which began in Great Britain in the 1730s and gained popularity in the United States during the series of Great Awakenings of the 18th and 19th century.Its key commitments are:...
churches present.

Very renown and with great importance far ahead of Billerbeck there is the abby of Benedictine- St. Joseph at Billerbeck-Gerleve. It is part of the Beuron congregation and since 1999 has been led by prior Pius Engelbert O.S.B. The abby also contains a house for retreat, a youth education unit, and a religious book store.

The evangelic church centre (Protestant) "Vom guten Hirten" (of the good shepherd) in Billerbeck is a modern style church with affiliated centre of parish.