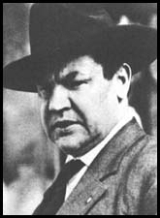 Overview
William Dudley Haywood better known as "Big Bill" Haywood, was a founding member and leader of the Industrial Workers of the World
Industrial Workers of the World
The Industrial Workers of the World is an international union. At its peak in 1923, the organization claimed some 100,000 members in good standing, and could marshal the support of perhaps 300,000 workers. Its membership declined dramatically after a 1924 split brought on by internal conflict...
(IWW), and a member of the Executive Committee of the Socialist Party of America
Socialist Party of America
The Socialist Party of America was a multi-tendency democratic-socialist political party in the United States, formed in 1901 by a merger between the three-year-old Social Democratic Party of America and disaffected elements of the Socialist Labor Party which had split from the main organization...
. During the first two decades of the 20th century, he was involved in several important labor battles, including the Colorado Labor Wars
Colorado Labor Wars
Colorado's most significant battles between labor and capital occurred primarily between miners and mine operators. In these battles the state government, with one clear exception, always took the side of the mine operators....
, the Lawrence textile strike
Lawrence textile strike
The Lawrence Textile Strike was a strike of immigrant workers in Lawrence, Massachusetts in 1912 led by the Industrial Workers of the World. Prompted by one mill owner's decision to lower wages when a new law shortening the workweek went into effect in January, the strike spread rapidly through the...
, and other textile strikes in Massachusetts
Massachusetts
The Commonwealth of Massachusetts is a state in the New England region of the northeastern United States of America. It is bordered by Rhode Island and Connecticut to the south, New York to the west, and Vermont and New Hampshire to the north; at its east lies the Atlantic Ocean. As of the 2010...
and New Jersey
New Jersey
New Jersey is a state in the Northeastern and Middle Atlantic regions of the United States. , its population was 8,791,894. It is bordered on the north and east by the state of New York, on the southeast and south by the Atlantic Ocean, on the west by Pennsylvania and on the southwest by Delaware...
.

Haywood was an advocate of industrial unionism
Industrial unionism
Industrial unionism is a labor union organizing method through which all workers in the same industry are organized into the same union—regardless of skill or trade—thus giving workers in one industry, or in all industries, more leverage in bargaining and in strike situations...
, a labor philosophy that favors organizing all workers in an industry under one union, regardless of the specific trade or skill level; this was in contrast to the craft unions that were prevalent at the time, such as the AFL
American Federation of Labor
The American Federation of Labor was one of the first federations of labor unions in the United States. It was founded in 1886 by an alliance of craft unions disaffected from the Knights of Labor, a national labor association. Samuel Gompers was elected president of the Federation at its...
.

A liberal is someone who leaves the room when a fight breaks out.

Socialism is so plain, so clear, and so simple that when a person becomes an intellectual he doesn't understand socialism.

[Christianity] was all nonsense, based on that profane compilation of fables called the Bible.

The bandage will remain on the eyes of Justice as long as the Capitalist has the cut, shuffle, and deal.Roughneck, The Life and Times of Big Bill Haywood, Peter Carlson, 1983, page 146.