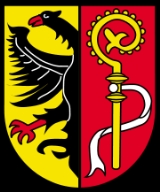 The district consists of hilly countryside between the rivers of the Danube
Danube
The Danube is a river in the Central Europe and the Europe's second longest river after the Volga. It is classified as an international waterway....
and the Iller
Iller
The Iller is a river in Bavaria, Germany. It is a right tributary of the Danube, 147 km in length.The source is located near Oberstdorf in the Allgäu region of the Alps, close to the Austrian border. From there it runs northwards, passing the towns of Sonthofen, Immenstadt, and Kempten...
. The Danube crosses the district in its westernmost part from south to north. The Iller forms the eastern border of the district. Another river is the Riss, an affluent of the Danube crossing the district from south to north.

The Federsee
Federsee
Federsee is a lake located just north of Bad Buchau in the region of Upper Swabia in Southern Germany. It is surrounded by moorland, partially overgrown with reeds. With a size of 33 km² , the area is one of the largest, groundwater fed, connected moorlands in Southern Germany. At its deepest...
is a small lake in the southwest of the district. Its area is only 1.4 km², but it is famous for Neolithic
Neolithic
The Neolithic Age, Era, or Period, or New Stone Age, was a period in the development of human technology, beginning about 9500 BC in some parts of the Middle East, and later in other parts of the world. It is traditionally considered as the last part of the Stone Age...
findings and rare birds.

The local newspaper is the Schwäbische Zeitung("Swabian Newspaper"). Biberach has also a film festival for German films which celebrated its 31st anniversary in 2009. 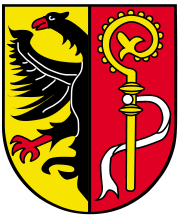 The imperial eagle
Imperial Eagle
An Imperial Eagle is a heraldic eagle used by an empire, notably:*the military standard of the Roman Empire, see Aquila .*the Byzantine imperial eagle*the German Reichsadler...
symbolizes the imperial city of Biberach. Originally the coat of arms of the city showed an eagle as well as a beaver
Beaver
The beaver is a primarily nocturnal, large, semi-aquatic rodent. Castor includes two extant species, North American Beaver and Eurasian Beaver . Beavers are known for building dams, canals, and lodges . They are the second-largest rodent in the world...
as a canting symbol. In 1488 the coat of arms of the city was changed to show only the beaver. The crosier symbolises the monasteries of the region.