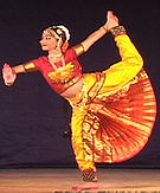 Overview
Bharata Natyam or Chadhir Attam(Tamil
Tamil language
Tamil is a Dravidian language spoken predominantly by Tamil people of the Indian subcontinent. It has official status in the Indian state of Tamil Nadu and in the Indian union territory of Pondicherry. Tamil is also an official language of Sri Lanka and Singapore...
: பரதநாட்டியம்), is a classical dance
Dance
Dance is an art form that generally refers to movement of the body, usually rhythmic and to music, used as a form of expression, social interaction or presented in a spiritual or performance setting....
form from the South Indian state of Tamil Nadu
Tamil Nadu
Tamil Nadu is one of the 28 states of India. Its capital and largest city is Chennai. Tamil Nadu lies in the southernmost part of the Indian Peninsula and is bordered by the union territory of Pondicherry, and the states of Kerala, Karnataka, and Andhra Pradesh...
, practiced predominantly in modern times by women. The dance is usually accompanied by classical Carnatic music
Carnatic music
Carnatic music is a system of music commonly associated with the southern part of the Indian subcontinent, with its area roughly confined to four modern states of India: Andhra Pradesh, Karnataka, Kerala, and Tamil Nadu...
. Its inspirations come from the sculptures of the ancient temple of Chidambaram
Chidambaram Temple
Thillai Natarajah Temple, Chidambaram is a Hindu temple dedicated to Shiva located in the town of Chidambaram, East-Central Tamil Nadu, South India. The temple is known as the foremost of all temples to Saivites and has influenced worship, architecture, sculpture and performance art for over two...
.
Texts surviving from the golden age of Tamil literature
Tamil literature
Tamil literature refers to the literature in the Tamil language. Tamil literature has a rich and long literary tradition spanning more than two thousand years. The oldest extant works show signs of maturity indicating an even longer period of evolution...
and poetry, known as the Sangam Age, such as the Tolkappiyam
Tolkappiyam
The Tolkāppiyam is a work on the grammar of the Tamil language and the earliest extant work of Tamil literature. It is written in the form of noorpaa or short formulaic compositions and comprises three books - the Ezhuttadikaram, the Solladikaram and the Poruladikaram. Each of these books is...
(தொல்கப்பியம்), as well as the later Silappadikaram
Cilappatikaram
Silappatikaram Silappatikaram has been dated to likely belong to the beginning of Christian era, although the author might have built upon a pre-existing folklore to spin this tale. The story involves the three Tamil kingdoms of the ancient era, the Chola, the Pandya and the Chera...
(சிலப்பதிகரம்), testify to a variety of dance traditions of Koothu
Koothu
Koothu , means dance or performance in Tamil language, is a folk art originated from the early Tamil country. But more precisely Koothu refers Therukoothu that is street dance or street play since it will be performed village squares. At early age the art of entertainment reached its peak in...
which flourished in these times.