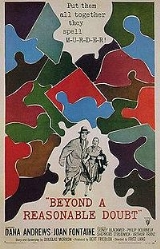 Encyclopedia
Beyond a Reasonable Doubt is a 1956 film
Film
A film, also called a movie or motion picture, is a series of still or moving images. It is produced by recording photographic images with cameras, or by creating images using animation techniques or visual effects...
directed by Fritz Lang
Fritz Lang
Friedrich Christian Anton "Fritz" Lang was an Austrian-American filmmaker, screenwriter, and occasional film producer and actor. One of the best known émigrés from Germany's school of Expressionism, he was dubbed the "Master of Darkness" by the British Film Institute...
and written by Douglas Morrow
Douglas Morrow
Douglas Morrow was a Hollywood screenwriter and film producer. He earned an Academy Award for his script for 1949's The Stratton Story, a biography of baseball player Monty Stratton, who was disabled in a hunting accident. Morrow died of an aneurysm in 1994.- Legacy :The Space Foundation...
. The film, considered film noir
Film noir
Film noir is a cinematic term used primarily to describe stylish Hollywood crime dramas, particularly those that emphasize cynical attitudes and sexual motivations. Hollywood's classic film noir period is generally regarded as extending from the early 1940s to the late 1950s...
, was the last American film directed by Lang.

A newspaper publisher, wanting to prove a point about the insufficiency of circumstantial evidence
Circumstantial evidence
Circumstantial evidence is evidence in which an inference is required to connect it to a conclusion of fact, like a fingerprint at the scene of a crime...
, talks his possible son-in-law Tom Garrett (Dana Andrews
Dana Andrews
Dana Andrews was an American film actor. He was one of Hollywood's major stars of the 1940s, and continued acting, though generally in less prestigious roles, into the 1980s.-Early life:...
) into a hoax in an attempt to expose the alleged ineptitude of the city's hard-line district attorney. The plan is to have Tom plant clues leading to his arrest for killing a female nightclub dancer. Once Tom is found guilty, he is to reveal the setup and humiliate the DA.

Tom agrees to the plan, not knowing that unforeseen events will put such a snag in the scheme that he ends up in danger of being executed. A friend holding back evidence that will clear Tom at his trial dies in an accident before he can testify.

Dennis L. White describes Beyond a Reasonable Doubt as having "considerable impact, due not so much to visual style, as to the narrative structure and mood and to the expertly devised plot, in which the turnabout is both surprising and convincing."

A new version of Beyond a Reasonable Doubt
Beyond a Reasonable Doubt (2009 film)
Beyond a Reasonable Doubt, a 2009 American film, is a remake of the 1956 film of the same name by Fritz Lang. Written, directed and filmed by Peter Hyams, the new version starred Michael Douglas and Amber Tamblyn. The production was announced in February 2008 and filming began the following...
directed by Peter Hyams
Peter Hyams
Peter Hyams is an American screenwriter, director and cinematographer, probably best known for directing the 1984 science fiction adventure 2010 , Capricorn One, the comic book adaptation Timecop and the Arnold Schwarzenegger horror/action film End of Days.-Family:Hyams was born in New York...
and starring Michael Douglas
Michael Douglas
Michael Kirk Douglas is an American actor and producer, primarily in movies and television. He has won three Golden Globes and two Academy Awards; first as producer of 1975's Best Picture, One Flew Over the Cuckoo's Nest, and as Best Actor in 1987 for his role in Wall Street. Douglas received the...
, Amber Tamblyn
Amber Tamblyn
Amber Rose Tamblyn is an American actress and poet. She first came to national attention in her role on the soap opera General Hospital as Emily Quartermaine, followed by a starring role on the prime-time series Joan of Arcadia portraying the title character...
, and Jesse Metcalfe
Jesse Metcalfe
Jesse Eden Metcalfe is an American actor, best known for his role on Desperate Housewives as John Rowland. He is also notable for his portrayal of Miguel Lopez-Fitzgerald on the soap opera Passions and his starring role as the title character in the movie John Tucker Must Die.-Early life:Metcalfe...
was released in theaters on September 11, 2009. It has been negatively received by critics, and currently has 7% on Rotten tomatoes, based on 27 reviews.
The source of this article is wikipedia, the free encyclopedia.  The text of this article is licensed under the GFDL.