β-peptides consist of β amino acids, which have their amino group bonded to the β carbon rather than the α carbon as in the 20 standard biological amino acid
Amino acid
Amino acids are molecules containing an amine group, a carboxylic acid group and a side-chain that varies between different amino acids. The key elements of an amino acid are carbon, hydrogen, oxygen, and nitrogen...
s. The only commonly naturally occurring β amino acid is β-alanine
Beta-alanine
β-Alanine is a naturally occurring beta amino acid, which are amino acids in which the amino group is at the β-position from the carboxylate group . The IUPAC name for β-alanine would be 3-aminopropanoic acid...
; although it is used as a component of larger bioactive molecules, β-peptides in general do not appear in nature. For this reason β-peptide-based antibiotics are being explored as ways of evading antibiotic resistance
Antibiotic resistance
Antibiotic resistance is a type of drug resistance where a microorganism is able to survive exposure to an antibiotic. While a spontaneous or induced genetic mutation in bacteria may confer resistance to antimicrobial drugs, genes that confer resistance can be transferred between bacteria in a...
. Early studies in this field were published in 1996 by the group of Dieter Seebach
Dieter Seebach
Dieter Seebach is a German chemist known for his synthesis of biopolymers and dendrimers, and for his contributions to stereochemistry. He was born on 31 October 1937 in Karlsruhe. He studied chemistry at the University of Karlsruhe under the supervision of Rudolf Criegee and at Harvard University...
and that of Samuel Gellman.

) because it is one atom away from the carboxylate group. In β amino acids, the amino group is bonded to the β carbon (

), which is found in most of the 20 standard amino acids. Only glycine
Glycine
Glycine is an organic compound with the formula NH2CH2COOH. Having a hydrogen substituent as its 'side chain', glycine is the smallest of the 20 amino acids commonly found in proteins. Its codons are GGU, GGC, GGA, GGG cf. the genetic code.Glycine is a colourless, sweet-tasting crystalline solid...
lacks a β carbon, which means that β-glycine is not possible.

The chemical synthesis of β amino acids can be challenging, especially given the diversity of functional group
Functional group
In organic chemistry, functional groups are specific groups of atoms within molecules that are responsible for the characteristic chemical reactions of those molecules. The same functional group will undergo the same or similar chemical reaction regardless of the size of the molecule it is a part of...
s bonded to the β carbon and the necessity of maintaining chirality
Chirality (chemistry)
A chiral molecule is a type of molecule that lacks an internal plane of symmetry and thus has a non-superimposable mirror image. The feature that is most often the cause of chirality in molecules is the presence of an asymmetric carbon atom....
. In the alanine
Alanine
Alanine is an α-amino acid with the chemical formula CH3CHCOOH. The L-isomer is one of the 20 amino acids encoded by the genetic code. Its codons are GCU, GCC, GCA, and GCG. It is classified as a nonpolar amino acid...
molecule shown, the β carbon is achiral; however, most larger amino acids have a chiral 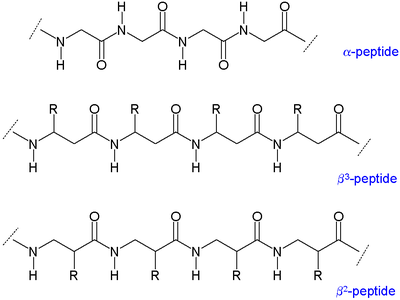 Because the backbones of β-peptides are longer than those of peptide
Peptide
Peptides are short polymers of amino acid monomers linked by peptide bonds. They are distinguished from proteins on the basis of size, typically containing less than 50 monomer units. The shortest peptides are dipeptides, consisting of two amino acids joined by a single peptide bond...
s that consist of α-amino acids, β-peptides form different secondary structure
Secondary structure
In biochemistry and structural biology, secondary structure is the general three-dimensional form of local segments of biopolymers such as proteins and nucleic acids...
s. The alkyl substituent
Substituent
In organic chemistry and biochemistry, a substituent is an atom or group of atoms substituted in place of a hydrogen atom on the parent chain of a hydrocarbon...
s at both the α and β positions in a β amino acid favor a gauche conformation about the bond between the α-carbon and β-carbon. This also affects the thermodynamic stability of the structure.

Many types of helix structures consisting of β-peptides have been reported. These conformation types are distinguished by the number of atoms in the hydrogen-bonded
Hydrogen bond
A hydrogen bond is the attractive interaction of a hydrogen atom with an electronegative atom, such as nitrogen, oxygen or fluorine, that comes from another molecule or chemical group. The hydrogen must be covalently bonded to another electronegative atom to create the bond...
ring that is formed in solution; 8-helix, 10-helix, 12-helix, 14-helix, and 10/12-helix have been reported. Generally speaking, β-peptides form a more stable helix than α-peptides.

β-peptides are stable against proteolytic degradation
Proteolysis
Proteolysis is the directed degradation of proteins by cellular enzymes called proteases or by intramolecular digestion.-Purposes:Proteolysis is used by the cell for several purposes...
in vitro
In vitro
In vitro refers to studies in experimental biology that are conducted using components of an organism that have been isolated from their usual biological context in order to permit a more detailed or more convenient analysis than can be done with whole organisms. Colloquially, these experiments...
and in vivo
In vivo
In vivo is experimentation using a whole, living organism as opposed to a partial or dead organism, or an in vitro controlled environment. Animal testing and clinical trials are two forms of in vivo research...
, an important advantage over natural peptides in the preparation of peptide-based drugs. β-Peptides have been used to mimic natural peptide-based antibiotics such as magainins, which are highly potent but difficult to use as drugs because they are degraded by proteolytic enzymes in the body.
The source of this article is wikipedia, the free encyclopedia.  The text of this article is licensed under the GFDL.