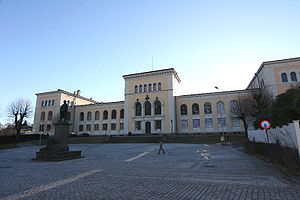 The Bergen Museum is a university museum
University museum
A university museum is a museum or collection run by a university, typically founded to aid teaching and research within the university. The Ashmolean Museum at the University of Oxford in England is an early example, originally housed in the building that is now the Museum of the History of Science...
in Bergen
Bergen
Bergen is the second largest city in Norway with a population of as of , . Bergen is the administrative centre of Hordaland county. Greater Bergen or Bergen Metropolitan Area as defined by Statistics Norway, has a population of as of , ....
, Norway
Norway
Norway , officially the Kingdom of Norway, is a Nordic unitary constitutional monarchy whose territory comprises the western portion of the Scandinavian Peninsula, Jan Mayen, and the Arctic archipelago of Svalbard and Bouvet Island. Norway has a total area of and a population of about 4.9 million...
. Founded in 1825 with the intent of building large collections in the fields of culture and natural history, it became the grounds for most of the academic activity in the city, a tradition which has prevailed since the museum became part of the University of Bergen
University of Bergen
The University of Bergen is located in Bergen, Norway. Although founded as late as 1946, academic activity had taken place at Bergen Museum as far back as 1825. The university today serves more than 14,500 students...
. Bergen Museum is divided into two departments, the Natural History
Natural history
Natural history is the scientific research of plants or animals, leaning more towards observational rather than experimental methods of study, and encompasses more research published in magazines than in academic journals. Grouped among the natural sciences, natural history is the systematic study...
Collections and the Cultural History
Cultural history
The term cultural history refers both to an academic discipline and to its subject matter.Cultural history, as a discipline, at least in its common definition since the 1970s, often combines the approaches of anthropology and history to look at popular cultural traditions and cultural...
Collections. It is also the caretaker of the botanical garden
Botanical garden
A botanical garden The terms botanic and botanical, and garden or gardens are used more-or-less interchangeably, although the word botanic is generally reserved for the earlier, more traditional gardens. is a well-tended area displaying a wide range of plants labelled with their botanical names...
surrounding the natural history building, and the city's arboretum
Arboretum
An arboretum in a narrow sense is a collection of trees only. Related collections include a fruticetum , and a viticetum, a collection of vines. More commonly, today, an arboretum is a botanical garden containing living collections of woody plants intended at least partly for scientific study...
.

Bergen Museum was founded in 1825 by Wilhelm Frimann Koren Christie
Wilhelm Frimann Koren Christie
Wilhelm Frimann Koren Christie was a Norwegian constitutional father, known for being the constitutional assembly's writer. -Background:...
, at the time president of the Storting. In its early years, the museum contained numerous art collections, including several works by the painter Johan Christian Dahl
Johan Christian Dahl
Johan Christian Claussen Dahl , often known as was a Norwegian landscape painter, who was connected to the Norwegian romantic nationalism. He is often considered have been "the father of Norwegian landscape painting"....
, cultural artefacts, and craftwork
Craftwork
Craftwork may refer to:* Handicraft* Kraftwerk, a highly influential German band...
items. In 1931, the museum moved from its location in the Seminarium Fredericianum building near Bergen katedralskole
Bergen katedralskole
Bergen katedralskole is an upper secondary school in Bergen, Norway...
, to a new building south-west of Lille Lungegårdsvann. This was the first dedicated museum building in Norway. The current natural history building was finished in 1865, and Bergen Museum moved in during 1866. The botanical garden was laid out between 1897 and 1899, and the cultural history department got its own building in 1927. The increasing research activity at the museum from the late 19th century and onwards led directly to the founding of the University of Bergen
University of Bergen
The University of Bergen is located in Bergen, Norway. Although founded as late as 1946, academic activity had taken place at Bergen Museum as far back as 1825. The university today serves more than 14,500 students...
in 1948.