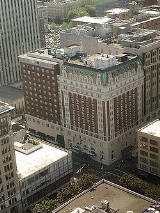 Encyclopedia
The Benson Hotel is a 287 room historic hotel
Hotel
A hotel is an establishment that provides paid lodging on a short-term basis. The provision of basic accommodation, in times past, consisting only of a room with a bed, a cupboard, a small table and a washstand has largely been replaced by rooms with modern facilities, including en-suite bathrooms...
building in downtown
Downtown Portland
Downtown Portland, the city center of Portland, Oregon, United States, is located on the west bank of the Willamette River. It is in the northeastern corner of the southwest section of the city and is where most of the city's high-rise buildings are found....
Portland, Oregon
Portland, Oregon
Portland is a city located in the Pacific Northwest, near the confluence of the Willamette and Columbia rivers in the U.S. state of Oregon. As of the 2010 Census, it had a population of 583,776, making it the 29th most populous city in the United States...
, United States
United States
The United States of America is a federal constitutional republic comprising fifty states and a federal district...
.
It is owned and operated by Coast Hotels & Resorts. It was originally known as the New Oregon Hotel, and is commonly known as "The Benson". It has a reputation as one of Portland's finest hotels. The hotel is named after notable businessman and philanthropist Simon Benson
Simon Benson
Simon Benson was a noted businessman and philanthropist from Portland, Oregon.-Background:Simon Benson was born Simon Iversen in Norway, one of seven children in the Berger Iversen family. His eldest brother Jon immigrated to the United States in 1861, followed by his sister Mathea in 1865...
. 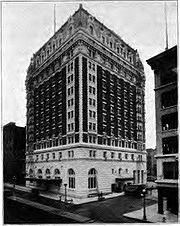 Simon Benson had wished to build a world-class hotel in Portland. During the population boom that occurred between the 1905 Lewis & Clark Centennial Exposition and the Great Depression
Great Depression
The Great Depression was a severe worldwide economic depression in the decade preceding World War II. The timing of the Great Depression varied across nations, but in most countries it started in about 1929 and lasted until the late 1930s or early 1940s...
, Benson fulfilled his wish.

The firm of Doyle
A. E. Doyle
Albert Ernest Doyle was a prolific architect in the U.S. states of Oregon and Washington. He is most often credited for his works as A.E. Doyle....
, Patterson, and Beach designed the main hotel building in French Second Empire style. The hotel opened on March 5, 1913 as an annex to the adjacent Oregon Hotel, on the southern half of the block. It was briefly known as the New Oregon Hotel, but was quickly renamed The Benson Hotel. Chicago's Blackstone Hotel
Blackstone Hotel
The Renaissance Blackstone Hotel is located on the corner of Michigan Avenue and Balbo Street in the Michigan Boulevard Historic District in the Loop community area of Chicago, Illinois. This 21-story hotel was built from 1908 to 1910 and designed by Marshall and Fox. On May 29, 1998, the...
served as the inspiration of the building's overall design.

Benson sold the hotel to William Boyd and Robert Keller in 1919. They, in turn, sold it to Western Hotels in 1944. In 1959, the old Oregon Hotel building next door was demolished by Western to make way for a 175 room annex to the 1912 building. Western was renamed Western International Hotels, and finally Westin Hotels
Westin Hotels
Westin Hotels & Resorts are an upscale hotel chain owned by Starwood Hotels & Resorts Worldwide. As of 2011, Westin operated over 160 hotels in 37 countries.-History:...
, and sold the hotel to WestCoast Hotels (now Coast Hotels
Coast Hotels
Coast Hotels & Resorts is a hotel chain in western North America with over 40 hotels and resorts in the states of Alaska, Hawaii, Washington, Oregon, California, Idaho and in the Canadian provinces of British Columbia, Alberta and the Northwest Territories....
) in 1988, two years after The Benson was listed in the National Register of Historic Places
National Register of Historic Places
The National Register of Historic Places is the United States government's official list of districts, sites, buildings, structures, and objects deemed worthy of preservation...
in 1986.

El Gaucho Restaurant is on the ground floor of the building.