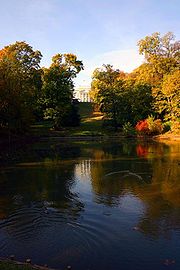 The present building is the latest of several that stood on the site since 1660. Belweder once belonged to Poland's last king, Stanisław August Poniatowski, who used it as a porcelain-manufacturing plant. From 1818 it was the residence of Russian Grand Duke Constantine
Grand Duke Constantine Pavlovich of Russia
Constantine Pavlovich was a grand duke of Russia and the second son of Emperor Paul I. He was the Tsesarevich of Russia throughout the reign of his elder brother Alexander I, but had secretly renounced his claim to the throne in 1823...
, who fled it at the beginning of the November 1830 Uprising
November Uprising
The November Uprising , Polish–Russian War 1830–31 also known as the Cadet Revolution, was an armed rebellion in the heartland of partitioned Poland against the Russian Empire. The uprising began on 29 November 1830 in Warsaw when the young Polish officers from the local Army of the Congress...
.

After the re-establishment of Poland's independence following World War I, it was (with a hiatus, 1922-26) the residence of Marshal Józef Piłsudski, Chief of State (1918–22) and later (1926-35) Minister of Military Affairs of Poland, who died there in 1935. (During the May 1926 coup d'état, President Stanisław Wojciechowski had abandoned it ahead of Piłsudski's advancing forces.)

During World War II, the building was extensively remodeled for Ludwig Fischer
Ludwig Fischer (NSDAP)
Dr. Ludwig Fischer was a German Nazi lawyer, politician and a war criminal.- Background :Born in Kaiserslautern into a Catholic family, as a student he joined the Nazi Party in 1926 and the Sturmabteilung in 1929, eventually rising to the rank of Gruppenführer...
, Governor of occupied Warsaw in the "General Government
General Government
The General Government was an area of Second Republic of Poland under Nazi German rule during World War II; designated as a separate region of the Third Reich between 1939–1945...
" of Poland. It remains one of the few original structures in Warsaw to survive World War II.

In 1945-1952 it was the residence of Bolesław Bierut, and later of the president of the Council of State
Council of State
The Council of State is a unique governmental body in a country or subdivision thereoff, though its nature may range from the formal name for the cabinet to a non-executive advisory body surrounding a head of state. It is sometimes regarded as the equivalent of a privy council.-Modern:*Belgian...
. From 1989 to July 1994, it was the official residence of Poland's president, but proved too small for that purpose.

Protection of the Belweder Palace by the Government Protection Bureau
Biuro Ochrony Rzadu
The Government Protection Bureau is Poland's equivalent of the United States Secret Service, providing antiterrorism and VIP security services for the Polish government.-Subjects of protection:* President of the Republic of Poland...
(Biuro Ochrony Rządu, abbreviated BOR) was difficult, as the palace is located on a hill that shares a fence with the popular Łazienki Park, located below, a major tourist attraction. For security reasons, the park has had to be partly closed during visits by foreign heads of state to the Belweder. Due to the size of Łazienki Park, this has proven difficult and time-consuming, and the Polish press has mocked Secret Service agents checking the bushes
Shrub
A shrub or bush is distinguished from a tree by its multiple stems and shorter height, usually under 5–6 m tall. A large number of plants may become either shrubs or trees, depending on the growing conditions they experience...
and disturbing the Park's peacocks
Peafowl
Peafowl are two Asiatic species of flying birds in the genus Pavo of the pheasant family, Phasianidae, best known for the male's extravagant eye-spotted tail, which it displays as part of courtship. The male is called a peacock, the female a peahen, and the offspring peachicks. The adult female...
.

Belweder is normally used by the President and the government for ceremonial purposes, while the President resides at the "Presidential Palace
Presidential Palace, Warsaw
The Presidential Palace in Warsaw, Poland, is the elegant classicist latest version of a building that has stood on the Krakowskie Przedmieście site since 1643. Over the years, it has been rebuilt and remodeled many times...
" in the city center. It also serves as an official residence for heads of state on official visits to Poland and other important guests. There have been plans to turn the Belweder Palace into a museum
Museum
A museum is an institution that cares for a collection of artifacts and other objects of scientific, artistic, cultural, or historical importance and makes them available for public viewing through exhibits that may be permanent or temporary. Most large museums are located in major cities...
dedicated to Józef Piłsudski. Currently it houses a small exhibition devoted to the Marshal. However, the current president of Poland, Bronisław Komorowski, has chosen to make Belweder his official residence.