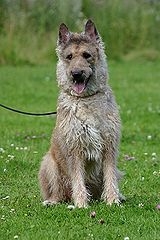 Like all Belgian Shepherds, the Laekenois is a medium-sized, hard-working, square-proportioned dog in the sheepdog
Herding dog
A herding dog, also known as a stock dog or working dog, is a type of pastoral dog that either has been trained in herding or belongs to breeds developed for herding...
family with sharply triangular ears. The Laekenois is recognized by its woolly brown and white coat, intermixed so as to give a tweedy appearance. Most kennel clubs' standards allow for black shading, principally in muzzle and tail, indicating the presence of the melanistic mask
Melanistic mask
A melanistic mask is a dog coat pattern that gives the appearance of a mask on the dog's face. The hairs on the muzzle, and sometimes entire face or ears, are colored by eumelanin instead of pheomelanin pigment. Eumelanin is typically black, but may instead be brown, dark gray, or light gray-brown...
gene
Gene
A gene is a molecular unit of heredity of a living organism. It is a name given to some stretches of DNA and RNA that code for a type of protein or for an RNA chain that has a function in the organism. Living beings depend on genes, as they specify all proteins and functional RNA chains...
.

The Belgian Laekenois originated as a dog for herding sheep at the Royal Castle of Laeken. Besides, its role as a herding dog, this breed is also used to guard linen that are placed in the field to dry, and later as a messenger dog in the First and Second World War.

The Laekenois is considered both the oldest and the most rare of the Belgian Shepherd Dogs. Until the advent of dog shows in the early 1900s, the four varieties were freely intermixed, in fact, there are only three genes (short/long coat, smooth/wire coat, fawn/black coat) that separate the varieties genetically. Purebred Laekenois occasionally give birth to smooth-coated puppies, which, depending on the pure-bred registry, can be registered as Malinois.