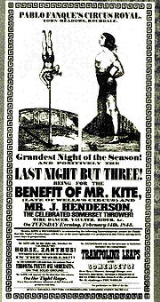 Being for the Benefit of Mr. Kite!
Topic Home
Discussion
0

Mssrs. KITE and HENDERSON, in announcing the following Entertainments ensure the Public that this Night's Production will be one of the most splendid ever produced in this Town, having been some days in preparation.
Mr. Kite will, for this night only,
introduce the
CELEBRATED
HORSE, ZANTHUS!
Well known to be one of the
best Broke Horses
IN THE WORLD!!!

Mr. HENDERSON will undertake the arduous Task of
THROWING TWENTY-ONE SOMERSETS,
ON THE SOLID GROUND.
Mr. KITE will appear, for the
first time this season,
On The Tight Rope,
When Two Gentlemen Amateurs
of this Town will
perform with him. Mr. HENDERSON will, for the first time
in Rochdale,
introduce his extraordinary
TRAMPOLINE LEAPS
AND
SOMERSETS!
Over Men & Horses, through Hoops,
over Garters and lastly through a
Hogshead
Hogshead
A hogshead is a large cask of liquid . More specifically, it refers to a specified volume, measured in either Imperial units or U.S. customary units, primarily applied to alcoholic beverages such as wine, ale, or cider....
of REAL FIRE!
In this branch of the profession Mr. H challenges THE WORLD!
For particulars see Bills of the day.

"Mr. J. Henderson" was John Henderson, a wire-walker, equestrian
Equestrianism
Equestrianism more often known as riding, horseback riding or horse riding refers to the skill of riding, driving, or vaulting with horses...
, trampoline
Trampoline
A trampoline is a device consisting of a piece of taut, strong fabric stretched over a steel frame using many coiled springs. People bounce on trampolines for recreational and competitive purposes....
artist, and clown
Clown
Clowns are comic performers stereotypically characterized by the grotesque image of the circus clown's colored wigs, stylistic makeup, outlandish costumes, unusually large footwear, and red nose, which evolved to project their actions to large audiences. Other less grotesque styles have also...
. While the poster made no mention of "Hendersons" plural, as Lennon sings, John Henderson did perform with his wife Agnes, the daughter of circus owner Henry Hengler. The Hendersons performed throughout Europe and Russia during the 1840s and 1850s."

One of the most musically complex songs on Sgt. Pepper, it was recorded on 17 February 1967 with overdubs on 20 February (organ sound effects), 28 March (harmonica, organ, guitar), 29 March (more organ sound effects), and 31 March. Lennon wanted the track to have a "carnival atmosphere", and told producer George Martin
George Martin
Sir George Henry Martin CBE is an English record producer, arranger, composer and musician. He is sometimes referred to as "the Fifth Beatle"— a title that he often describes as "nonsense," but the fact remains that he served as producer on all but one of The Beatles' original albums...
that he wanted "to smell the sawdust on the floor." In the middle eight bars, multiple recordings of fairground organ
Fairground organ
A fairground organ is a pipe organ designed for use in a commercial public fairground setting to provide loud music to accompany fairground rides and attractions...
s and calliope
Calliope (music)
A calliope is a musical instrument that produces sound by sending a gas, originally steam or more recently compressed air, through large whistles, originally locomotive whistles....
music were spliced together to attempt to produce this request; after a great deal of unsuccessful experimentation, Martin instructed recording engineer Geoff Emerick
Geoff Emerick
Geoffrey Emerick is an English recording studio audio engineer, who is best known for his work with The Beatles' albums Revolver, Sgt. Pepper's Lonely Hearts Club Band, The Beatles and Abbey Road...
to chop the tape into pieces with scissors, throw them up in the air, and re-assemble them at random.

On 17 February Lennon sings the words "For the benefit of Mr. Kite!" in a joke accent, just before Emerick announces, "For the Benefit of Mr. Kite! This is take 1." Lennon immediately responds, "Being for the Benefit of Mr. Kite!" reinforcing his title preference, a phrase lifted intact from the original Pablo Fanque
Pablo Fanque
Pablo Fanque was the first black circus proprietor in Britain. His circus, in which he himself was a performer, was the most popular circus in Victorian Britain for 30 years, a period that is regarded as the golden age of the circus...
poster. The exchange is recorded in The Beatles Recording Sessions (slightly misquoted) and audible on track 8 of disc 2 of Anthology 2
Anthology 2
Anthology 2 is a compilation album by The Beatles, released by Apple Records in March 1996. It is the second of the three-volume Anthology collection, all of which tie-in with the televised special The Beatles Anthology. The opening track is "Real Love", the second of the two recordings that...
. The original recording can also be heard during the loading screen for the song if it is downloaded in the video game The Beatles: Rock Band
The Beatles: Rock Band
The Beatles: Rock Band is a 2009 music video game developed by Harmonix Music Systems, published by MTV Games, and distributed by Electronic Arts. It is the third major console release in the Rock Band music video game series, in which players can simulate the playing of rock music by using...
.

Although Lennon once said of the song that he "wasn't proud of that" and "I was just going through the motions," in 1980 he described it as "pure, like a painting, a pure watercolour."

It was one of three songs from the Sgt. Pepper album that was banned from playing on the BBC
BBC
The British Broadcasting Corporation is a British public service broadcaster. Its headquarters is at Broadcasting House in the City of Westminster, London. It is the largest broadcaster in the world, with about 23,000 staff...
, supposedly because the phrase "Henry the Horse" combined two words that were individually known as slang for heroin. Lennon denied that the song had anything to do with heroin.