Encyclopedia
Begum Hazrat Mahal also known as Begum
Begum
Begum, Begam or Baigum is a Turkic title given to female family members of a Baig or 'Beg', a higher official. The term Begum is derived from the word Beg, and means a female member of the Beg's family.Also used Begzadi, for Ex...
of Awadh
Awadh
Awadh , also known in various British historical texts as Oudh or Oude derived from Ayodhya, is a region in the centre of the modern Indian state of Uttar Pradesh, which was before independence known as the United Provinces of Agra and Oudh...
, was the first wife of Nawab
Nawab of Awadh
The Nawab of Awadh is the title of rulers who governed the state of Awadh in India in the 18th and 19th century. The Nawabs of Awadh originated form Persia-Establishment:...
Wajid Ali Shah
Wajid Ali Shah
Wajid Ali Shah was the fifth King of Oudh, holding the position from 13 February 1847 to 7 February 1856....
.

Her maiden name was Muhammadi Khanum and she was born at Faizabad
Faizabad
City of Faizabad , previous capital of Awadh, is the headquarters of Faizabad District and a municipal board in the state of Uttar Pradesh, India, situated on the banks of river Ghaghra . Faizabad has a twin city of Ayodhya, which is considered to be the birthplace of Rama...
, Awadh, India. She was a courtesan by profession and had been taken into the royal harem as a Khawasin, after being sold by her parents to Royal agents . Then promoted to a Pari. She became a Begum after being accepted as a royal concubine of the King of Oudh., and she was bestowed the title 'Hazrat Mahal' after the birth of their son, Birjis Qadra
Birjis Qadra
Berjis Qadr was the son of Wajid Ali Shah and was last, Padshah-e Awadh, Shah-e Zaman.-External links:* * * *...
.

She was a junior wife of the last Tajdaar-e-Awadh, Wajid Ali Shah
Wajid Ali Shah
Wajid Ali Shah was the fifth King of Oudh, holding the position from 13 February 1847 to 7 February 1856....
. The British had annexed Oudh in 1856 and Wajid Ali Shah was exiled to Calcutta. After, her husband was exiled to Calcutta, she took charge of the affairs of the state of Awadh
Awadh
Awadh , also known in various British historical texts as Oudh or Oude derived from Ayodhya, is a region in the centre of the modern Indian state of Uttar Pradesh, which was before independence known as the United Provinces of Agra and Oudh...
despite her divorce from the Nawab, which then was a large part of the current state of Uttar Pradesh
Uttar Pradesh
Uttar Pradesh abbreviation U.P. , is a state located in the northern part of India. With a population of over 200 million people, it is India's most populous state, as well as the world's most populous sub-national entity...
, India
India
India , officially the Republic of India , is a country in South Asia. It is the seventh-largest country by geographical area, the second-most populous country with over 1.2 billion people, and the most populous democracy in the world...
.

During India’s First War of independence
Indian Rebellion of 1857
The Indian Rebellion of 1857 began as a mutiny of sepoys of the British East India Company's army on 10 May 1857, in the town of Meerut, and soon escalated into other mutinies and civilian rebellions largely in the upper Gangetic plain and central India, with the major hostilities confined to...
(1857–58), Begum Hazrat Mahal led a band of her supporters against the British
British Raj
British Raj was the British rule in the Indian subcontinent between 1858 and 1947; The term can also refer to the period of dominion...
, and was even able to seize the control of Lucknow
Lucknow
Lucknow is the capital city of Uttar Pradesh in India. Lucknow is the administrative headquarters of Lucknow District and Lucknow Division....
. She declared her son Birjis Qadra
Birjis Qadra
Berjis Qadr was the son of Wajid Ali Shah and was last, Padshah-e Awadh, Shah-e Zaman.-External links:* * * *...
as the king of Oudh. When the forces under the command of the British re-captured Lucknow
Capture of Lucknow
The Capture of Lucknow was a battle of Indian rebellion of 1857. The British recaptured the city of Lucknow which they had abandoned in the previous winter after the relief of a besieged garrison in the Residency, and destroyed the organised resistance by the rebels in the Kingdom of Awadh The...
and most of Oudh, she was forced to retreat.

One of the principal complaints of Begum Hazrat Mahal was that the East India Company
East India Company
The East India Company was an early English joint-stock company that was formed initially for pursuing trade with the East Indies, but that ended up trading mainly with the Indian subcontinent and China...
casually demolished temples and mosques in order to make way for roads. In a proclamation issued during the final days of the revolt, she mocked the British claim to allow freedom of worship:

Ultimately, she had to retreat to Nepal
Nepal
Nepal , officially the Federal Democratic Republic of Nepal, is a landlocked sovereign state located in South Asia. It is located in the Himalayas and bordered to the north by the People's Republic of China, and to the south, east, and west by the Republic of India...
, where she was initially refused asylum by the Rana prime minister Jang Bahadur
Jang Bahadur
Maharaja Jung Bahadur Rana was a ruler of Nepal and founder of the Rana dynasty of Nepal...
but was later allowed to stay. She died there in 1879 and was buried in a nameless grave on the grounds of Kathmandu's Jama Masjid. 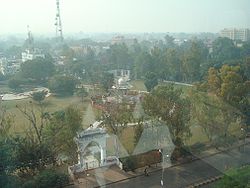 On 15 August 1962, she was honored at a simple yet serious ceremony in the old Victoria Park. A marble memorial was announced as open that was built by the state Government in the memory of the Begum as she played a very crucial role during the era of the first freedom movement in 1857. This memorial was adorned with strings of flowers and brightened by multi-colored bulbs and neon tubes. There is also a marble tablet that has four round brass plaques that bear the Coat of Arms of Awadh Royal Family.

It is located in the heart of the city, Begum Hazrat Mahal Park once used to be a rally ground. It’s been witness many Ravanas go up in fire during Dusshera and numerous Lucknow Mahotsavas have been hosted here. But what you see today is a totally different landmark, a walker’s paradise. With pathways that are interwoven into the beautiful, green landscaping in the Park, it’s also a visual delight of sorts. While the mornings are marked by scores of people walking at different paces, the evenings are relatively inactive at the park. But when the fountains go up and the lights turn on, it’s a sight most of can feast our eyes on. And one which comes as a relief from the mundane sight of the traffic zipping past it. It is on the crossing of B.H.M and opposite to hotel Clarks Avadh.