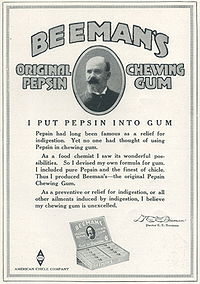 Beemans gum is a chewing gum
Chewing gum
Chewing gum is a type of gum traditionally made of chicle, a natural latex product, or synthetic rubber known as polyisobutylene. For economical and quality reasons, many modern chewing gums use rubber instead of chicle...
invented by Ohio
Ohio
Ohio is a Midwestern state in the United States. The 34th largest state by area in the U.S.,it is the 7th‑most populous with over 11.5 million residents, containing several major American cities and seven metropolitan areas with populations of 500,000 or more.The state's capital is Columbus...
physician Dr. Edward E. Beeman in the late 19th century.

Beeman originally marketed the gum, which is made of pepsin
Pepsin
Pepsin is an enzyme whose precursor form is released by the chief cells in the stomach and that degrades food proteins into peptides. It was discovered in 1836 by Theodor Schwann who also coined its name from the Greek word pepsis, meaning digestion...
powder and chicle
Chicle
Manilkara chicle is a tropical evergreen tree native to Mexico and Central America. The tree ranges from Veracruz in Mexico south to Atlántico in Colombia...
, as an aid to digestion. It became a part of the American Chicle Company
American Chicle Company
The American Chicle Company was a chewing gum trust founded by Edward E. Beeman and Jonathan Primle.-History:It was incorporated in Trenton, New Jersey on June 2, 1899. Its market capitalization was $9,000,000 with one third of its stock preferred and 6% cumulative dividends...
in 1898, and continued on after the purchase of American Chicle by Warner-Lambert in 1962. Production ceased in 1978 due to lagging sales. In 1985, as part of a nostalgia campaign, it was brought back to the market along with Clove and Black Jack
Black Jack (gum)
Black Jack is an aniseed flavored chewing gum made by Cadbury Adams, originally the American Chicle Company.In 1869, exiled former Mexican president and general Antonio Lopez de Santa Anna was living in New Jersey...
chewing gums.

The original wrapper had a pig logo
Logo
A logo is a graphic mark or emblem commonly used by commercial enterprises, organizations and even individuals to aid and promote instant public recognition...
, but was later replaced with a logo featuring the Beeman's name in scroll and a picture of Dr. Beeman. The current wrapper design has a white and red background with white and black lettering. Beemans is sporadically produced by Cadbury Adams as a nostalgia gum, along with the other historic gums Clove and Black Jack
Black Jack (gum)
Black Jack is an aniseed flavored chewing gum made by Cadbury Adams, originally the American Chicle Company.In 1869, exiled former Mexican president and general Antonio Lopez de Santa Anna was living in New Jersey...
. Since then, because of regular demand, all three brands have been introduced with huge popularity.

The gum was prominently featured in the movies The Right Stuff, Hot Shots!
Hot Shots!
Hot Shots! is a 1991 comedy spoof film starring Charlie Sheen, Cary Elwes, Valeria Golino, Lloyd Bridges, Kevin Dunn, Jon Cryer and Ryan Stiles . It was directed by Jim Abrahams, co-director of Airplane! , and was written by Abrahams and Pat Proft...
, and The Rocketeer
The Rocketeer (film)
The Rocketeer is a 1991 period superhero adventure film produced by Walt Disney Pictures and based on the character of the same name created by comic book writer/artist Dave Stevens. Directed by Joe Johnston, the film stars Billy Campbell, Jennifer Connelly, Alan Arkin, Timothy Dalton, Paul Sorvino...
. While it has been considered the "lucky" gum of pilots, Beemans in fact became popular with aviators due to the antacid qualities of pepsin, useful due to the agitation of stomach acid in flight. This, combined with the ear-pressure equalizing characteristics of chewing any type of gum, made Beemans a common sight in cockpits. The sporadic availability has led some aviators to buy it by the carton whenever possible.