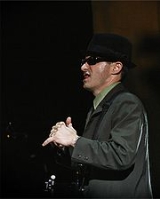 The Beastie Boys began as hardcore punk
Hardcore punk
Hardcore punk is an underground music genre that originated in the late 1970s, following the mainstream success of punk rock. Hardcore is generally faster, thicker, and heavier than earlier punk rock. The origin of the term "hardcore punk" is uncertain. The Vancouver-based band D.O.A...
band in 1979, first appearing on the compilation cassette New York Thrash
New York Thrash
New York Thrash is a hardcore punk compilation album released by ROIR in 1982.Considered a definitive document of the early New York hardcore scene, New York Thrash features rare and otherwise unreleased recordings, including the first recorded material by the Beastie Boys, as well as material by...
before releasing their first EP
Extended play
An EP is a musical recording which contains more music than a single, but is too short to qualify as a full album or LP. The term EP originally referred only to specific types of vinyl records other than 78 rpm standard play records and LP records, but it is now applied to mid-length Compact...
, Polly Wog Stew, in 1982. After achieving moderate local success with the 1983 release of their experimental hip hop 12" Cooky Puss
Cooky Puss
Cooky Puss is the second EP by the Beastie Boys, and features their first Hip hop recording. It was released in 1983 as a 12-inch single on Rat Cage Records...
, they made the transition to hip hop in 1984 and a string of successful 12" singles followed by their debut album Licensed to Ill
Licensed to Ill
In 1998, the album was selected as one of The Sources 100 Best Rap Albums.It is still the only album by a white hip-hop act to receive the coveted 5 mics from The Source....
in 1986 which received international critical acclaim and commercial success.

"Yo ho ho and a bottle of Brass Monkey,And when my girlie shakes her hips, she sure gets funky." - Rhymin

"Down with Adrock and Mike D. and you ain't,And I got more juice than Picasso got paint." - The New Style

"Girls with boyfriends are the kind I like,I'll steal your honey like I stole your bike." - The New Style

"D. pulled me over said,

Hide your gold,The girl is crafty like ice is cold!

"I keep a pistol in my pocket so you better be cautious,Fly around the world, but it makes me nauseous." - Posse In Effect

"I'm the king of the classroom, coolin' in the back,My teacher had beef so I gave her a smack,She chased me out of class, she was strapped with a ruler,Went to the bathroom, rolled myself a wooler." - Slow Ride

"Because I'm hard hittin', always bitten, cool as hell,I got the tree on my mirror so my car won't smell." - Slow Ride