The Battle of the Pyramids, also known as the Battle of Embabeh, was fought on July 21, 1798 between the French
France
The French Republic , The French Republic , The French Republic , (commonly known as France , is a unitary semi-presidential republic in Western Europe with several overseas territories and islands located on other continents and in the Indian, Pacific, and Atlantic oceans. Metropolitan France...
army in Egypt
Egypt
Egypt , officially the Arab Republic of Egypt, Arabic: , is a country mainly in North Africa, with the Sinai Peninsula forming a land bridge in Southwest Asia. Egypt is thus a transcontinental country, and a major power in Africa, the Mediterranean Basin, the Middle East and the Muslim world...
under Napoleon Bonaparte
Napoleon I of France
Napoleon Bonaparte was a French military and political leader during the latter stages of the French Revolution.As Napoleon I, he was Emperor of the French from 1804 to 1815...
, and local Mamluk
Mamluk
A Mamluk was a soldier of slave origin, who were predominantly Cumans/Kipchaks The "mamluk phenomenon", as David Ayalon dubbed the creation of the specific warrior...
forces. It occurred during France's Egyptian Campaign and was the battle where Napoleon put into use one of his significant contributions to tactics, the massive divisional square
Infantry square
An infantry square is a combat formation an infantry unit forms in close order when threatened with cavalry attack.-Very early history:The formation was described by Plutarch and used by the Romans, and was developed from an earlier circular formation...
. Actually a rectangle, the first and second demi-brigades of the division formed the front and rear faces, while the third demi-brigade formed the two sides. 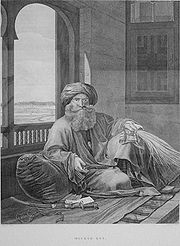 In July of 1798, Napoleon was marching from Alexandria toward Cairo after invading and capturing the former. He met the forces of the ruling Mamluks nine miles (15 km) from the Pyramids, and only four miles (6 km) from Cairo. The Mamluk forces were commanded by Murad Bey
Murad Bey
Murad Bey was an Egyptian Mamluk chieftain , cavalry commander and joint ruler of Egypt with Ibrahim Bey. He was of Georgian origin having been born in Tbilisi....
and Ibrahim Bey
Ibrahim Bey
Ibrahim Bey was an Egyptian Mamluk chieftain of Georgian origin.Ibrahim Bey was born as Abram Shinjikashvili into the family of a Christian priest in Martqopi in the eastern Georgian province of Kakheti. As a child, he was captured by Ottoman slave raiders and sold out in Egypt where he was...
and had powerful and highly developed cavalry
Cavalry
Cavalry or horsemen were soldiers or warriors who fought mounted on horseback. Cavalry were historically the third oldest and the most mobile of the combat arms...
. This fight was known as The Battle of Chobrakit.

Napoleon realized that the only Egyptian troops of any worth on the battlefield were the cavalry. He exhorted his troops, saying, "Forward! Remember that from those monuments yonder forty centuries look down upon you."

Napoleon ordered an advance on Murad's army with each of the five divisions of his army organized into hollow rectangles with cavalry
Cavalry
Cavalry or horsemen were soldiers or warriors who fought mounted on horseback. Cavalry were historically the third oldest and the most mobile of the combat arms...
and baggage at the center and cannon at the corners.

The French divisions advanced south in echelon, with the right flank leading and the left flank protected by the Nile. From right to left, Napoleon posted the divisions of Desaix
Louis Charles Antoine Desaix
Louis Charles Antoine Desaix was a French general and military leader. According to the usage of the time, he took the name Louis Charles Antoine Desaix de Veygoux.-Biography:...
, Reynier
Jean Reynier
Jean Louis Ebénézer Reynier rose in rank to become a French army general officer during the French Revolutionary Wars. He led a division under Napoleon Bonaparte in the French Campaign in Egypt and Syria...
, Dugua, Vial and Bon
Louis André Bon
Louis André Bon was a French general of the French Revolutionary Wars, best known for his participation in the 1798 French invasion of Egypt-Life:...
. In addition, Desaix sent a small detachment to occupy the nearby village of Biktil, just to the west. Murad anchored his right flank on the Nile at the village of Embabeh, which was fortified and held with infantry and some ancient cannons. His Mamluk cavalry deployed on the desert flank. Ibrahim, with a second army, watched helplessly from the east bank of the Nile, unable to intervene. (Chandler asserts that Napoleon's 25,000-strong army outnumbered Murad's 6,000 Mamluks and 15,000 infantry.)
At about 3:30 pm, the Mamluk cavalry hurled itself at the French without warning. The divisional "squares" of Desaix, Reynier and Dugua held firm and repelled the horsemen with point-blank musket and artillery fire. Unable to make an impression on the French formations, some of the frustrated Mamluks rode off to attack Desaix's detached force. Even this was a failure. Meanwhile, nearer the river, Bon's division deployed into attack columns and charged Embabeh. Breaking into the village, the French routed the garrison. Trapped against the river, many of the Mamluks and infantry tried to swim to safety, but hundreds drowned. Napoleon reported a loss of 29 killed and 260 wounded. Murad's losses were far heavier, perhaps as many as 3,000 of the irreplaceable Mamluk cavalry and unknown numbers of infantry. Murad escaped to Upper Egypt
Upper Egypt
Upper Egypt is the strip of land, on both sides of the Nile valley, that extends from the cataract boundaries of modern-day Aswan north to the area between El-Ayait and Zawyet Dahshur . The northern section of Upper Egypt, between El-Ayait and Sohag is sometimes known as Middle Egypt...
, where he carried on an active guerilla campaign before being run to earth by Desaix in late 1799.

Upon the news of the defeat of their legendary cavalry, the waiting Mamluk armies in Cairo dispersed to Syria
Syria
Syria , officially the Syrian Arab Republic , is a country in Western Asia, bordering Lebanon and the Mediterranean Sea to the West, Turkey to the north, Iraq to the east, Jordan to the south, and Israel to the southwest....
to reorganize. The Battle of the Pyramids signaled the beginning of the end of 700 years of Mamluk rule in Egypt. Despite this auspicious beginning, Admiral Horatio Nelson's victory in the Battle of the Nile
Battle of the Nile
The Battle of the Nile was a major naval battle fought between British and French fleets at Aboukir Bay on the Mediterranean coast of Egypt from 1–3 August 1798...
ten days later ended Napoleon's hopes for a conquest of the Middle East
Middle East
The Middle East is a region that encompasses Western Asia and Northern Africa. It is often used as a synonym for Near East, in opposition to Far East...
.
Engulfed by the west bank portion of the city of Cairo, nothing remains of the battlefield today.
The source of this article is wikipedia, the free encyclopedia.  The text of this article is licensed under the GFDL.