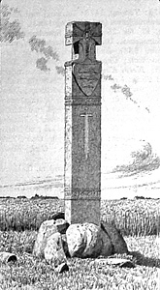 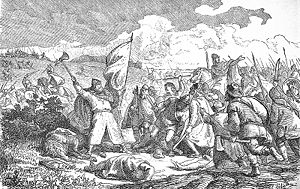 The Battle of Grathe Heath was fought in 1157 between the Danish
Denmark
Denmark is a Scandinavian country in Northern Europe. The countries of Denmark and Greenland, as well as the Faroe Islands, constitute the Kingdom of Denmark . It is the southernmost of the Nordic countries, southwest of Sweden and south of Norway, and bordered to the south by Germany. Denmark...
armies of Valdemar I
Valdemar I of Denmark
Valdemar I of Denmark , also known as Valdemar the Great, was King of Denmark from 1157 until 1182.-Biography:...
and his rival for the Danish throne, Sweyn III
Sweyn III of Denmark
Sweyn III Grathe was the King of Denmark between 1146 and 1157, in shifting alliances with Canute V and his own cousin Valdemar I. In 1157, the three agreed a tripartition of Denmark...
. Valdemar's forces won the battle, and Sweyn III was slain while attempting to flee.


Background to the battle

The battle of Grathe (Grey) Heath on 23 October 1157 marked the end of a civil war between Sweyn III, Canute V and Valdemar I the Great, all contenders for the Danish throne. After Eric III of Denmark
Eric III of Denmark
Eric III Lamb was the King of Denmark from 1137 until 1146. He was the grandson of Eric I of Denmark and the nephew of Eric II of Denmark, whom he succeeded on the throne. He abdicated in 1146, as the first and only Danish monarch to do so. His succession led to a period of civil war between...
had abdicated in 1146, Sweyn III, son of Eric Emune, was declared king of Zealand and Scania
Scania
Scania is the southernmost of the 25 traditional non-administrative provinces of Sweden, constituting a peninsula on the southern tip of the Scandinavian peninsula, and some adjacent islands. The modern administrative subdivision Skåne County is almost, but not totally, congruent with the...
, while Canute, son of king Magnus, became king of Jutland
Jutland
Jutland , historically also called Cimbria, is the name of the peninsula that juts out in Northern Europe toward the rest of Scandinavia, forming the mainland part of Denmark. It has the North Sea to its west, Kattegat and Skagerrak to its north, the Baltic Sea to its east, and the Danish–German...
. Canute made several attempts to conquer Zealand (1147 and 1150), but was driven off and fled to Germany
Germany
Germany , officially the Federal Republic of Germany , is a federal parliamentary republic in Europe. The country consists of 16 states while the capital and largest city is Berlin. Germany covers an area of 357,021 km2 and has a largely temperate seasonal climate...
, where he managed to raise an army.

In 1152, a battle was fought at Gedebæk, close to Viborg
Viborg, Denmark
Viborg , a town in central Jutland, Denmark, is the seat of both Viborg municipality and Region Midtjylland. Viborg is also the seat of the Western High Court, the High Court for the Jutland peninsula...
. Canute lost and appealed to the German king (later emperor), Frederic I Barbarossa
Frederick I, Holy Roman Emperor
Frederick I Barbarossa was a German Holy Roman Emperor. He was elected King of Germany at Frankfurt on 4 March 1152 and crowned in Aachen on 9 March, crowned King of Italy in Pavia in 1155, and finally crowned Roman Emperor by Pope Adrian IV, on 18 June 1155, and two years later in 1157 the term...
, who commanded both kings to meet him at Merseburg
Merseburg
Merseburg is a town in the south of the German state of Saxony-Anhalt on the river Saale, approx. 14 km south of Halle . It is the capital of the Saalekreis district. It had a diocese founded by Archbishop Adalbert of Magdeburg....
. Here, Frederic confirmed Sweyn's rights of kingship, and Sweyn swore fealty to him.

The nobles of Denmark were getting worried about the growing German influence. Valdemar, having at first joined Sweyn, who had made him duke of Schleswig
Schleswig
Schleswig or South Jutland is a region covering the area about 60 km north and 70 km south of the border between Germany and Denmark; the territory has been divided between the two countries since 1920, with Northern Schleswig in Denmark and Southern Schleswig in Germany...
, changed sides and was betrothed to Canute's half-sister Sophie.

Both Canute and Sweyn were hailed as kings at the Landsting
Landsting
Landsting can mean*Thing - the supreme assembly of a land in Scandinavia, during Viking and mediaeval times*The Parliament of Greenland.*Landstinget - one of the two houses of the Danish parliament between 1849 and 1953...
in Viborg in 1154.

The three contenders agreed to share power, so that Valdemar would rule Jutland, Canute would rule the islands of Zealand and Funen
Funen
Funen , with a size of 2,984 km² , is the third-largest island of Denmark following Zealand and Vendsyssel-Thy, and the 163rd largest island of the world. Funen is located in the central part of the country and has a population of 454,358 inhabitants . The main city is Odense, connected to the...
, and Sweyn would rule Scania. Then a reconciling feast was agreed upon, and it was held in Roskilde
Roskilde
Roskilde is the main city in Roskilde Municipality, Denmark on the island of Zealand. It is an ancient city, dating from the Viking Age and is a member of the Most Ancient European Towns Network....
9 August 1157. But, according to Saxo Grammaticus
Saxo Grammaticus
Saxo Grammaticus also known as Saxo cognomine Longus was a Danish historian, thought to have been a secular clerk or secretary to Absalon, Archbishop of Lund, foremost advisor to Valdemar I of Denmark. He is the author of the first full history of Denmark.- Life :The Jutland Chronicle gives...
, Sweyn ordered his men to kill the two other kings. Canute was slain, but Valdemar, though wounded, managed to turn over some great candlesticks and escape in the following fire and confusion. He fled out in the darkness and managed to return to Jutland.

People flocked to Valdemar's banner when Sweyn's treachery was revealed, and he gathered a great host. Sweyn landed at Grenå
Grenå
Grenaa or Grenå is a town in central Denmark with a population of 14,308 . The town centre is about 2 km west of the east coast of the Djursland peninsula in Jutland's Region Midtjylland...
(at the mouth of the Djurså stream), but his fleet was destroyed by a combination of force and guile. Sweyn marched upon Randers
Randers
Randers is a city in Randers municipality on the Jutland peninsula in central Denmark. It is Denmark's sixth-largest city, with a population of 60,656 . Randers city is the main town of the municipality and the site of its municipal council.-Overview:Randers municipality has 94,750 inhabitants...
and Valdemar retreated to the other side of the Gudenå
Gudenå
The River Guden , on the Jutland peninsula, is Denmark's longest river. It flows 176 kilometres from Tinnet Krat in Vejle County, between Nørre Snede and Tørring-Uldum, to Randers Fjord in Randers, on a course which takes it through central Jutland...
river and tore down the bridge.

At the end of September Valdemar felt that he was powerful enough to face Sweyn's army, and on 23 October the two armies met at Grathe Heath. The battle was short, but vicious. Sweyn failed to locate Valdemar's main force, and was suddenly attacked with such force that he fled his army. He blundered into the swampy areas at one end of the Hauge Lake, and lost his weapons and armour. Shortly afterwards, he was captured and killed with an axe
Axe
The axe, or ax, is an implement that has been used for millennia to shape, split and cut wood; to harvest timber; as a weapon; and as a ceremonial or heraldic symbol...
, according to tradition, by angry peasants.

After his death, Sweyn was nicknamed Grathe, after the place where he lost both his crown and his life.

Valdemar, having outlived all his rival pretenders, became the sole King of Denmark. He reorganized and rebuilt war-torn Denmark. Thor Lange
Thor Lange
Thor Næve Lange was a Danish author.-Biography:He was born in Copenhagen. About 1877 he went to Moscow as Danish consul. His works include translations from ancient Greek, Old French, and Russian, and he made a good translation of Longfellow's Golden Legend . He also compiled Skildringer fra den...
has put up a stone cross at the site of the battle.
The source of this article is wikipedia, the free encyclopedia.  The text of this article is licensed under the GFDL.