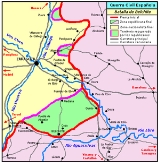 Encyclopedia
Battle of Belchite was a group of military operations that took place in the Spanish Civil War
Spanish Civil War
The Spanish Civil WarAlso known as The Crusade among Nationalists, the Fourth Carlist War among Carlists, and The Rebellion or Uprising among Republicans. was a major conflict fought in Spain from 17 July 1936 to 1 April 1939...
between 24 August and 7 September 1937 nearby the town of Belchite
Belchite
Belchite is a village in the province of Zaragoza, Spain, about 40 km southeast of Zaragoza. It is the capital of Campo de Belchite comarca and is located in a plain surrounded by low hills, the highest of which is Lobo...
, in Aragon
Aragon
Aragon is a modern autonomous community in Spain, coextensive with the medieval Kingdom of Aragon. Located in northeastern Spain, the Aragonese autonomous community comprises three provinces : Huesca, Zaragoza, and Teruel. Its capital is Zaragoza...
.

After failed attempts to capture Brunete, the Republican
Second Spanish Republic
The Second Spanish Republic was the government of Spain between April 14 1931, and its destruction by a military rebellion, led by General Francisco Franco....
military leadership decided to try a new series of offensives to slow down the Nationalist advance in the north. A new campaign, therefore, was planned for Aragon
Aragon
Aragon is a modern autonomous community in Spain, coextensive with the medieval Kingdom of Aragon. Located in northeastern Spain, the Aragonese autonomous community comprises three provinces : Huesca, Zaragoza, and Teruel. Its capital is Zaragoza...
. The decision was based on political as well as military considerations, as the government saw it as a way to decrease anarchist and Workers' Party of Marxist Unification (POUM
Poum
Poum is a commune in the North Province of New Caledonia, an overseas territory of France in the Pacific Ocean. The town of Poum is located in the far northwest, located on the southern part of Banare Bay, with Mouac Island just offshore....
) influence in the region by bringing in communist troops and incorporating three anarchist divisions into the newly-designated Army of the East under command of general Sebastian Pozas. Another objective of the planned offensive was to take Zaragoza
Zaragoza
Zaragoza , also called Saragossa in English, is the capital city of the Zaragoza Province and of the autonomous community of Aragon, Spain...
, the capital of Aragon, which was only a few kilometres behind enemy lines. Capturing the regional capital offered more than symbolic significance, because it was also the communication centre of whole Aragon front. The first year of the war in this part of Spain had emphasised that the possession of key town was of far greater importance than the control of wide areas of open countryside. The Nationalists had only three divisions, the Fifty-First, Fifty-Second and One-Hundred-Fifth, spread across the three hundred kilometres of front, with the majority of their troops concentrated in towns. General Pozas and his chief-of-staff Antonio Cordon set up their headquarters in Bujaraloz
Bujaraloz
Bujaraloz is a municipality located in the province of Zaragoza, Aragon, Spain. According to the 2004 census , the municipality has a population of 1,002 inhabitants.- External links :*....
. Their plan was to break through at seven different points on the central hundred-kilometre stretch between Zuera
Zuera
Zuera is a municipality located in the province of Zaragoza, Aragon, Spain. According to the 2010 census, the municipality has a population of 7510 inhabitants....
and Belchite
Belchite
Belchite is a village in the province of Zaragoza, Spain, about 40 km southeast of Zaragoza. It is the capital of Campo de Belchite comarca and is located in a plain surrounded by low hills, the highest of which is Lobo...
. The object of splitting their attacking forces was to divide any Nationalist counter-attack and to offer fewer targets for bombing and strafing than at Brunete.

The Republican Army of the East, together with the XI and XV International Brigades, started its offensive with eighty thousand men, three squadrons of aviation with Polikarpov I-16
Polikarpov I-16
The Polikarpov I-16 was a Soviet fighter aircraft of revolutionary design; it was the world's first cantilever-winged monoplane fighter with retractable landing gear. The I-16 was introduced in the mid-1930s and formed the backbone of the Soviet Air Force at the beginning of World War II...
(moscas), Polikarpov I-15
Polikarpov I-15
The Polikarpov I-15 was a Soviet biplane fighter aircraft of the 1930s. Nicknamed Chaika because of its gulled upper wings, it was operated in large numbers by the Soviet Air Force, and together with the Polikarpov I-16 monoplane, was one of the standard fighters of the Spanish Republicans during...
(chatos) (ninety airplanes in total) and one hundred five T-26
T-26
The T-26 tank was a Soviet light infantry tank used during many conflicts of the 1930s as well as during World War II. It was a development of the British Vickers 6-Ton tank and is widely considered one of the most successful tank designs of the 1930s....
tanks in three main and five secondary directions on a hundred-kilometre stretch between Zuera
Zuera
Zuera is a municipality located in the province of Zaragoza, Aragon, Spain. According to the 2010 census, the municipality has a population of 7510 inhabitants....
and Belchite. On the first two fronts (north and centre), the Republicans managed to take only vacant territories. On the southern portion of the front, the Republican army took the village of Mediana immediately and Quinto was taken on the fourth day of the offensive. In the village of Codo
Codó
Codó is a city in Maranhão, Brazil. It is located at around ....
, there were three Carlist companies that tied down two Republican brigades. The fiercest resistance was encountered in Belchite, where seven thousand Nationalist defenders resisted until 7 September in the surrounded town when Republicans took it. These delays allowed the Nationalists to bring reinforcements and the full-scale offensive on Zaragoza failed.

With five nationalist divisions whereof two were withdrawn from Madrid
Madrid
Madrid is the capital and largest city of Spain. The population of the city is roughly 3.3 million and the entire population of the Madrid metropolitan area is calculated to be 6.271 million. It is the third largest city in the European Union, after London and Berlin, and its metropolitan...
front, artillery and sixty-five Fiat CR.32
Fiat CR.32
The Fiat CR.32 was an Italian biplane fighter used in the Spanish Civil War and World War II. This nimble little Fiat was compact, robust and highly manoeuvrable and gave impressive displays all over Europe in the hands of the Pattuglie Acrobatiche. The CR.32 fought in North and East Africa, in...
, Heinkel He 46
Heinkel He 46
-See also:-Bibliography:* Kay, A.L. and Smith, J.R. German Aircraft of World War II. Naval Institute Press, 2002....
, Savoia Sm-49 and Messerschmitt Bf-109 nationalist counter offensive started on 30 August and ended on 6 September. The only major Nationalist success was the shooting down five I-15, but they were unable to break Republican lines.

Although the Republicans gained some initial success and managed to push the front line ten kilometres deeper into Nationalist territory, both of the main objectives of the offensive failed. The Nationalists did not postpone their big offensive in the north, as they had done before the Battle of Brunete
Battle of Brunete
The Battle of Brunete , fought 15 miles west of Madrid, was a Republican attempt to alleviate the pressure exerted by the Nationalists on the capital and on the north during the Spanish Civil War...
, and the attempt to capture Saragossa failed.

The whole town was destroyed. Franco ordered that the ruins be left untouched as a "live" monument of war. A new town was constructed near the former. Filmmakers frequent the monument.
The holes and caves in Lobo Hill
Lobo Hill
Lobo, also known as El Lobo, Cabezo del Lobo, Cerro del Lobo and Mojón del Lobo, is a 630 m high mountain in the Campo de Belchite comarca, Zaragoza Province, Aragon, Spain, located about 3 km to the south of Belchite and 2 km east of Almonacid de la Cuba.This hill is named after the wolf , for...
south of Belchite from where the Spanish Republican artillery positions fired towards what is now Belchite old town have been preserved and are open to visitors.
The source of this article is wikipedia, the free encyclopedia.  The text of this article is licensed under the GFDL.