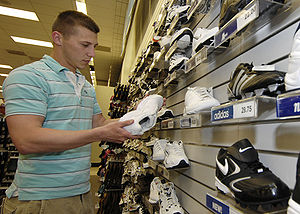 Over the next few years, every exchange operated by the Army and Air Force Exchange Service will be rebranded simply as an Exchange (X) to simplify differentiation between the similar sounding BX and PX names.

Shopping privileges are also generally extended in overseas locations to U.S. Government civilian employees and their dependents who are assigned overseas. Shopping privileges can vary overseas according to applicable status-of-forces agreements
Status of Forces Agreement
A status of forces agreement is an agreement between a host country and a foreign nation stationing forces in that country. SOFAs are often included, along with other types of military agreements, as part of a comprehensive security arrangement...
with host nations. A typical exchange is similar to a department store
Department store
A department store is a retail establishment which satisfies a wide range of the consumer's personal and residential durable goods product needs; and at the same time offering the consumer a choice of multiple merchandise lines, at variable price points, in all product categories...
, but other services such as military clothing sales/uniform shops, barber shops, hair care, beauty, laundry/dry cleaning, gas stations, fast food outlets, convenience stores ("Shoppettes" or "Mini Marts"), beer and wine sales, liquor stores ("Class Six" or "Package Stores"), lawn and garden shops, movie theaters and even vehicle maintenance and repair services are commonly available. Most (but not all) sales by exchanges are free of state and local sales or VAT
Vat
Vat or VAT may refer to:* A type of container such as a barrel, storage tank, or tub, often constructed of welded sheet stainless steel, and used for holding, storing, and processing liquids such as milk, wine, and beer...
taxes as the sales take place on U.S. military reservations (exceptions include gasoline sales in the U.S. and sales by concessionaires licensed by the exchange).

Unlike commissaries
Defense Commissary Agency
The Defense Commissary Agency is an agency of the United States Department of Defense that operates more than 250 commissaries worldwide...
(military grocery stores), exchanges, for the most part, do not receive significant appropriations from the federal government
Federal government
The federal government is the common government of a federation. The structure of federal governments varies from institution to institution. Based on a broad definition of a basic federal political system, there are two or more levels of government that exist within an established territory and...
and must operate on a for-profit basis. With the exception of military personnel assigned to duty with the exchange services, exchange service employees' salaries are paid from revenues generated from sales of merchandise, except for annual raises from funds appropriated by Congress
United States Congress
The United States Congress is the bicameral legislature of the federal government of the United States, consisting of the Senate and the House of Representatives. The Congress meets in the United States Capitol in Washington, D.C....
. Exchanges are deemed Category C non-appropriated fund (NAF) activities, meaning they are designed to not only be self-sufficient, but generate a profit.

Of course, exchanges are normally located on military reservations and, as a result, do not pay rent or tax for the use of land. Exchanges' tax-exempt status (as instrumentalities of the U.S. Government) also reduces certain operating expenses. While exchanges must pay for the cost of transporting goods within the continental United States, Congress appropriates funds to subsidize the transportation costs of American merchandise to overseas exchange locations so that such items are available and affordable to personnel stationed overseas.

Exchanges play an important role for U.S. military and Government personnel assigned overseas as they are often the only local source for American retail merchandise, such as clothing, electronics, books and magazines, fast food, etc. Exchanges also supply gasoline at prices roughly approximating those in the U.S., normally on a rationed basis, to overseas personnel for personal use, since fuel prices in most foreign countries (where U.S. military are stationed) are normally much higher due to local taxes.

Overseas exchanges also sell new North American-made vehicles to assigned personnel in cooperation with the "Big Three" automakers (General Motors
General Motors
General Motors Company , commonly known as GM, formerly incorporated as General Motors Corporation, is an American multinational automotive corporation headquartered in Detroit, Michigan and the world's second-largest automaker in 2010...
, Ford
Ford Motor Company
Ford Motor Company is an American multinational automaker based in Dearborn, Michigan, a suburb of Detroit. The automaker was founded by Henry Ford and incorporated on June 16, 1903. In addition to the Ford and Lincoln brands, Ford also owns a small stake in Mazda in Japan and Aston Martin in the UK...
and Chrysler
Chrysler
Chrysler Group LLC is a multinational automaker headquartered in Auburn Hills, Michigan, USA. Chrysler was first organized as the Chrysler Corporation in 1925....
) and Harley-Davidson
Harley-Davidson
Harley-Davidson , often abbreviated H-D or Harley, is an American motorcycle manufacturer. Founded in Milwaukee, Wisconsin, during the first decade of the 20th century, it was one of two major American motorcycle manufacturers to survive the Great Depression...
motorcycles.

AAFES and NEX have also established smaller field exchanges to provide military personnel with comforts and everyday items while deployed, even in combat zones such as Iraq
Iraq
Iraq ; officially the Republic of Iraq is a country in Western Asia spanning most of the northwestern end of the Zagros mountain range, the eastern part of the Syrian Desert and the northern part of the Arabian Desert....
and Afghanistan
Afghanistan
Afghanistan , officially the Islamic Republic of Afghanistan, is a landlocked country located in the centre of Asia, forming South Asia, Central Asia and the Middle East. With a population of about 29 million, it has an area of , making it the 42nd most populous and 41st largest nation in the world...
. NEX also operates small exchanges, known as "ship's stores," onboard seagoing vessels. They are managed and operated by sailors in the Ship's Serviceman
Ship's Serviceman
Ship's Serviceman is a rating in the US Navy.-General information:Ship's servicemen manage and operate shipboard retail and service activities using microcomputers. This includes ship's stores, vending machines and video games, barber shops, laundry and dry cleaning plants, and tailor shops...
rating.

Most profits earned by the exchange services, after paying operating expenses, are used to support community activities aimed at improving morale among service members and their families.