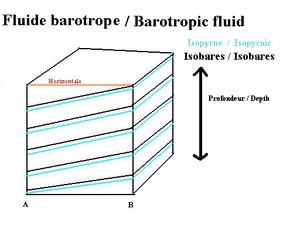 In meteorology
Meteorology
Meteorology is the interdisciplinary scientific study of the atmosphere. Studies in the field stretch back millennia, though significant progress in meteorology did not occur until the 18th century. The 19th century saw breakthroughs occur after observing networks developed across several countries...
, a barotropic atmosphere is one in which the pressure depends only on the density and vice versa, so that isobaric
Isobaric process
An isobaric process is a thermodynamic process in which the pressure stays constant. The term derives from the Greek isos, , and barus,...
surfaces (constant-pressure surfaces) are also isopycnic
Isopycnic
Isopycnic means "of the same density." In particular, an isopycnic surface is a surface of constant density. This term is a bit more obscure than the similar terms isobaric or isothermal surfaces, which describe surfaces of constant pressure and constant temperature respectively...
surfaces (constant-density surfaces). The isobaric surfaces will also be isothermal surfaces, hence (from the thermal wind equation) the geostrophic wind
Geostrophic wind
The geostrophic wind is the theoretical wind that would result from an exact balance between the Coriolis effect and the pressure gradient force. This condition is called geostrophic balance. The geostrophic wind is directed parallel to isobars . This balance seldom holds exactly in nature...
is independent of height. Hence the motions of a rotating barotropic air mass or fluid are strongly constrained.

Barotropic fluids are also important idealized fluids in astrophysics, such as in the study of stellar interiors or of the interstellar medium. One common class of barotropic model used in astrophysics is a polytropic fluid. Typically, the barotropic assumption is not very realistic.