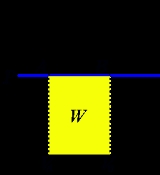 Overview
An isobaric process is a thermodynamic process in which the pressure stays constant. The term derives from the Greek isos, (equal), and barus, (heavy). The heat transferred to the system does work but also changes the internal energy of the system:

What is the relevance of isobaric and isochoric process on engine operations?
More

Encyclopedia
An isobaric process is a thermodynamic process in which the pressure stays constant. The term derives from the Greek isos, (equal), and barus, (heavy). The heat transferred to the system does work but also changes the internal energy of the system: 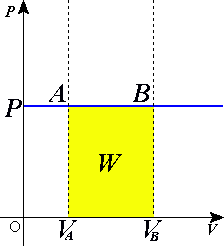 where Δ means change over the whole process, whereas d denotes a differential. Since pressure is constant, this means that

Applying the ideal gas law
Ideal gas law
The ideal gas law is the equation of state of a hypothetical ideal gas. It is a good approximation to the behavior of many gases under many conditions, although it has several limitations. It was first stated by Émile Clapeyron in 1834 as a combination of Boyle's law and Charles's law...
, this becomes

is specific heat at a constant volume.

Substituting the last two equations into the first equation produces:

is specific heat at a constant pressure.

To find the molar specific heat capacity of the gas involved, the following equations apply for any general gas that is calorically perfect. The property

for diatomic gasses like air and its major components, and

for monatomic gasses like the noble gas
Noble gas
The noble gases are a group of chemical elements with very similar properties: under standard conditions, they are all odorless, colorless, monatomic gases, with very low chemical reactivity...
ses. The formulas for specific heats would reduce in these special cases:

The motivation for the specific sign convention
Sign convention
In physics, a sign convention is a choice of the physical significance of signs for a set of quantities, in a case where the choice of sign is arbitrary. "Arbitrary" here means that the same physical system can be correctly described using different choices for the signs, as long as one set of...
s of thermodynamics
Thermodynamics
Thermodynamics is a physical science that studies the effects on material bodies, and on radiation in regions of space, of transfer of heat and of work done on or by the bodies or radiation...
comes from early development of heat engines. When designing a heat engine, the goal is to have the system produce and deliver work output. The source of energy in a heat engine, is a heat input.

. It would be convenient to have a similar equation for isobaric processes. Substituting the second equation into the first yields

The quantity U + p V is a state function so that it can be given a name. It is called enthalpy
Enthalpy
Enthalpy is a measure of the total energy of a thermodynamic system. It includes the internal energy, which is the energy required to create a system, and the amount of energy required to make room for it by displacing its environment and establishing its volume and pressure.Enthalpy is a...
, and is denoted as H. Therefore an isobaric process can be more succinctly described as

Enthalpy and isobaric specific heat capacity are very useful mathematical constructs, since when analyzing a process in an open system, the situation of zero work occurs when the fluid flows at constant pressure. In an open system, enthalpy is the quantity which is useful to use to keep track of energy content of the fluid.

A given quantity (mass m) of gas in a changing volume produces a change in density ρ. In this context the ideal gas law is written