Bara Imambara is an imambara complex in Lucknow, India, built by Asaf-ud-daulah, Nawab of Lucknow, in 1784. It is also called the Asafi Imambara.

Bara means big, and an imambara is a shrine built by Shia Muslims for the purpose of Azadari. The Bara Imambara is among the grandest buildings of Lucknow.

The complex also includes the large Asfi mosque
Mosque
A mosque is a place of worship for followers of Islam. The word is likely to have entered the English language through French , from Portuguese , from Spanish , and from Berber , ultimately originating in — . The Arabic word masjid literally means a place of prostration...
, the bhulbhulayah (the labyrinth), and bowli, a step well with running water. Two imposing gateways lead to the main hall.

The Bara Imambara was built in 1783, a year of a devastating famine, and one of Asaf-ud-Daula's objectives in embarking on this grandiose project was to provide employment for people in the region. According to reports, the famine continued for over a decade and the construction of the building continued for this time. It is said that ordinary people used to work in the day building up the edifice, while noblemen and other elite were called at night to break down all the structure raised, as they were incapable of doing anything else, according to a chronicle of the period. This see-saw efforts continued till the famine period was over. It was a project that preceded a Keynesian like intervention for employment generation. 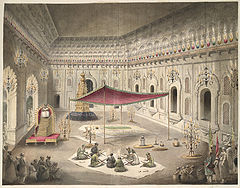 The architecture of the complex reflects the maturation of ornamented Mughal
Mughal architecture
Mughal architecture, an amalgam of Islamic, Persian, Turkish and Indian architecture, is the distinctive style developed by the Mughals in the 16th, 17th and 18th centuries in what is now India, Pakistan, Bangladesh and Afghanistan. It is symmetrical and decorative in style.The Mughal dynasty was...
design, namely the Badshahi Mosque
Badshahi Mosque
The Badshahi Mosque or the 'King's Mosque' in Lahore, commissioned by the sixth Mughal Emperor Aurangzeb in 1671 and completed in 1673, is the second largest mosque in Pakistan and South Asia and the fifth largest mosque in the world...
- it is one of the last major projects not incorporating any European elements or the use of iron. The main imambara consists of a large vaulted central chamber containing the tomb of Asaf-ud-Daula. At 50 by 16 meters and over 15 meters tall, it has no beams supporting the ceiling, and is one of the largest such arched constructions in the world. There are eight surrounding chambers built to different roof heights, permitting the space above these to be reconstructed as a three-dimensional labyrinth
Labyrinth
In Greek mythology, the Labyrinth was an elaborate structure designed and built by the legendary artificer Daedalus for King Minos of Crete at Knossos...
with passages interconnecting with each other through 489 identical doorways. This part of the building, known as a popular attraction, and often the whole complex may be referred to as the bhulbhulayah. It is possibly the only existing maze in India and came about unintenionally to support the weight of the building, constructed on marshy land. Asaf-ud-Daula also erected the 18-m (59-f high Rumi Darwaza, just outside. This portal, embellished with lavish decorations, was the Imambara's west facing entrance.

The design of the Imambara was obtained through a competitive process. The winner was an architect Kifayatullah, who also lies buried in the main hall of the Imambara. It is another unique aspect of the building where the sponsor and the architect lie buried besides each other.

There is also a blocked (tunnel) passageway which, according to legends, leads through a mile-long underground passage to a location near the Gomti river. Other passages are rumoured to lead to Faizabad
Faizabad
City of Faizabad , previous capital of Awadh, is the headquarters of Faizabad District and a municipal board in the state of Uttar Pradesh, India, situated on the banks of river Ghaghra . Faizabad has a twin city of Ayodhya, which is considered to be the birthplace of Rama...
(the former seat of power of the Nawabs), Allahabad
Allahabad
Allahabad , or Settled by God in Persian, is a major city of India and is one of the main holy cities of Hinduism. It was renamed by the Mughals from the ancient name of Prayaga , and is by some accounts the second-oldest city in India. It is located in the north Indian state of Uttar Pradesh,...
and even to Delhi
Delhi
Delhi , officially National Capital Territory of Delhi , is the largest metropolis by area and the second-largest by population in India, next to Mumbai. It is the eighth largest metropolis in the world by population with 16,753,265 inhabitants in the Territory at the 2011 Census...
. They exist but have been sealed after a period of long disuse as well as fears over the disappearance of people who had purportedly gone missing, while exploring.
The source of this article is wikipedia, the free encyclopedia.  The text of this article is licensed under the GFDL.