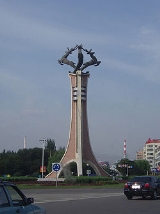 Baotou is divided into 10 county-level divisions, including 7 districts,1 county and 2 banners.

The area now known as Baotou was inhabited since ancient times by nomads, most notably the Mongols. Near the end of the Han Dynasty, Lü Bu
Lü Bu
Lü Bu was a military general and later a minor warlord during the late Han Dynasty period of Chinese history. According to the Records of Three Kingdoms, Lü Bu was highly-skilled in horse-riding and archery, and was thus nicknamed "Flying General"...
, a particularly noteworthy warrior, was born here. Compared to the capital, Hohhot
Hohhot
Hohhot , is a city in north-central China and the capital of the Inner Mongolian Autonomous Region, serving as the region's administrative, economic, and cultural centre....
, Baotou's construction as a city came relatively late, being incorporated as a town in 1809. The city's site was chosen because it was in an arable region of the Yellow River
Yellow River
The Yellow River or Huang He, formerly known as the Hwang Ho, is the second-longest river in China and the sixth-longest in the world at the estimated length of . Originating in the Bayan Har Mountains in Qinghai Province in western China, it flows through nine provinces of China and empties into...
's Great Bend.

A railway from Beijing was constructed in 1931, and the city began spurring some industrial sites. A German-Chinese joint-venture in 1934 constructed the Baotou Airport
Baotou Airport
Baotou Airport is an airport in Baotou, Inner Mongolia, China . Baotou Airport was founded preliminarily in 1934 and opened in 1956. The airport is 14 miles from downtown areas and taxi or bus is available....
and opened a weekly route connecting Baotou with Ningxia
Ningxia
Ningxia, formerly transliterated as Ningsia, is an autonomous region of the People's Republic of China. Located in Northwest China, on the Loess Plateau, the Yellow River flows through this vast area of land. The Great Wall of China runs along its northeastern boundary...
and Lanzhou
Lanzhou
Lanzhou is the capital and largest city of Gansu Province in Northwest China. A prefecture-level city, it is a key regional transportation hub, allowing areas further west to maintain railroad connections to the eastern half of the country....
.

When young Owen Lattimore
Owen Lattimore
Owen Lattimore was an American author, educator, and influential scholar of Central Asia, especially Mongolia. In the 1930s he was editor of Pacific Affairs, a journal published by the Institute of Pacific Relations, and then taught at Johns Hopkins University from 1938 to 1963...
visited Baotou in 1925, it was still "a little husk of a town in a great hollow shell of mud ramparts, where two busy streets made a traders' quarter", but already already an important railhead. Qinghai
Qinghai
Qinghai ; Oirat Mongolian: ; ; Salar:) is a province of the People's Republic of China, named after Qinghai Lake...
and Gansu
Gansu
' is a province located in the northwest of the People's Republic of China.It lies between the Tibetan and Huangtu plateaus, and borders Mongolia, Inner Mongolia, and Ningxia to the north, Xinjiang and Qinghai to the west, Sichuan to the south, and Shaanxi to the east...
wool and hides were brought down the Huanghe by raft and boat from Lanzhou
Lanzhou
Lanzhou is the capital and largest city of Gansu Province in Northwest China. A prefecture-level city, it is a key regional transportation hub, allowing areas further west to maintain railroad connections to the eastern half of the country....
to Baotou, and shipped from Baotou by rail to the east (in particular, to Tianjin
Tianjin
' is a metropolis in northern China and one of the five national central cities of the People's Republic of China. It is governed as a direct-controlled municipality, one of four such designations, and is, thus, under direct administration of the central government...
for export). The river traffic was one-way only, however, as the fast current made sailing up the Huanghe impractical. To travel from Baotou back to Lanzhou or Yinchuan, one would use a cart and camel road. There were also caravan roads from Baotou to Ordos
Ordos
-Places:*Ordos Loop of the Yellow River, a region of China*Ordos Desert, in Inner Mongolia*Ordos City, city and district in Inner Mongolia*Ordos International Circuit, a race track in Ordos City.-People:...
and the Alxa League
Alxa League
Alxa League is one of 12 prefecture level divisions and three extant leagues of Inner Mongolia. The league borders Mongolia to the north, Bayan Nur to the northeast, Wuhai and Ordos to the east, Ningxia to the southeast, and Gansu to the south and west. The capital is Bayan Hot in the aimag's...
.

On September 19, 1949, after the September 19 Rebellion, Baotou fell under Communist control. The People's Government was formed in February 1950. In the early Communist years Baotou served as an industrial centre, with a significant portion of its economy coming from its steel production, and it continues this reputation until this day.

Baotou is located in the west of Inner Mongolia, located at the junction of two economic zones: the Bohai Economic Rim
Bohai Economic Rim
The Bohai Economic Rim or BER or Bohai Bay Economic Rim is a term used to describe the economic hinterland surrounding Beijing and Tianjin. It also includes areas in Hebei, Liaoning and Shandong which surrounds the Bohai Sea. This region has gone through major changes in economic and infrastructures...
and the Upper Yellow River Natural Resources Enrichment Zone (黄河上游资源富集区). Its administrative area borders Mongolia to the north, while the Yellow River, which flows for 214 kilometres (133 mi) in the prefecture, is south of the urban area itself. The Tumochuan Plateau (土默川平原), Hetao Plateau, and Yin Mountains
Yin Mountains
The Yin Mountains are mountains in the steppe forming the southern border of the eastern Gobi Desert of the Inner Mongolia Autonomous Region, as well as the northern part of Hebei province....
cross the urban area and central part of the prefecture. Baotou City ranges in latitude from 41° 20' to 42° 40' N and in longitude from 109° 50' to 111° 25' E.

Baotou features a cold semi-arid climate (Köppen
Köppen climate classification
The Köppen climate classification is one of the most widely used climate classification systems. It was first published by Crimea German climatologist Wladimir Köppen in 1884, with several later modifications by Köppen himself, notably in 1918 and 1936...
BSk), marked by long, cold and very dry winters, hot, somewhat humid summers, and strong winds, especially in spring. Temperatures often fall below −15 °C in winter and rise above 30 °C (86 °F) in summer. The annual precipitation is approximately 300 millimetres (11.8 in), with more than half of it falling in July and August alone. Due to the aridity and elevation, temperature differences between day and night can be large, especially in spring. In 2002, there were 12 instances of dust storm
Dust storm
A dust / sand storm is a meteorological phenomenon common in arid and semi-arid regions. Dust storms arise when a gust front or other strong wind blows loose sand and dirt from a dry surface. Particles are transported by saltation and suspension, causing soil to move from one place and deposition...
s.


The mines in Bayan Obo
Bayan Obo
Bayan Obo Mining District, , or Baiyun-Obo or Baiyun'ebo, is a mining town in the west of Inner Mongolia, People's Republic of China. It is under the administration of Baotou City, more than to the south....
are the greatest source of rare earth metals globally. In 2005, they accounted for 45% of the total production on earth.