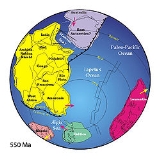 Encyclopedia
Baltica is a name applied by geologists to a late-Proterozoic
Proterozoic
The Proterozoic is a geological eon representing a period before the first abundant complex life on Earth. The name Proterozoic comes from the Greek "earlier life"...
, early-Palaeozoic continent
Continent
A continent is one of several very large landmasses on Earth. They are generally identified by convention rather than any strict criteria, with seven regions commonly regarded as continents—they are : Asia, Africa, North America, South America, Antarctica, Europe, and Australia.Plate tectonics is...
that now includes the East European craton
East European craton
The East European craton is the core of the Baltica proto-plate and consists of three crustal regions/segments: Fennoscandia to the northwest, Volgo-Uralia to the east, and Sarmatia to the south...
of northwestern Eurasia
Eurasia
Eurasia is a continent or supercontinent comprising the traditional continents of Europe and Asia ; covering about 52,990,000 km2 or about 10.6% of the Earth's surface located primarily in the eastern and northern hemispheres...
. Baltica was created as an entity not earlier than 1.8 billion years ago. Before this time, the three segments/continents that now comprise the East European craton were in different places on the globe. Baltica existed on a tectonic plate called the Baltic Plate
Baltic Plate
The Baltic Plate was an ancient tectonic plate that existed from the Cambrian period to the Carboniferous period. The Baltic Plate collided against Siberia, to form the Ural Mountains about 500 million years ago. The Baltic Plate, however, fused onto the Eurasian Plate when the Baltic Plate...
.