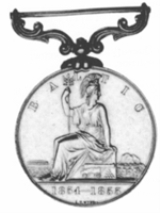 Encyclopedia
The Baltic Medal was a campaign medal
Campaign medal
A campaign medal is a military decoration which is awarded to a member of the military who serves in a designated military operation or performs duty in a geographical theater...
approved in 1856, for issue to officers and men of the Royal Navy
Royal Navy
The Royal Navy is the naval warfare service branch of the British Armed Forces. Founded in the 16th century, it is the oldest service branch and is known as the Senior Service...
, Royal Marines
Royal Marines
The Corps of Her Majesty's Royal Marines, commonly just referred to as the Royal Marines , are the marine corps and amphibious infantry of the United Kingdom and, along with the Royal Navy and Royal Fleet Auxiliary, form the Naval Service...
, and Royal Sappers and Miners who served in Baltic Sea operations against Russia in the Baltic theatre of the Crimean War. The medal primarily covered naval actions but it was also awarded to 100 men or the Royal Sappers and Miners for their work in the demolition of Russian fortifications at Bomarsund
Bomarsund
Bomarsund may refer to:*Bomarsund, Åland, fortress in the Åland Islands, in the Baltic Sea*Bomarsund, Northumberland, village in Northumberland, England...
and Sveaborg.